Looking over list of movies to review on the blog, I could have sworn I reviewed this video on the porncast. This Robert Van Damme video should have been reviewed on the podcast by virtue of the first scene alone. In that scene, Bobby is recruiting bouncers for his bar's Halloween party and first up is Brodie Newport. Van Damme gets him into the kitchen and proceeds to fuck him in dozen of positions, kissing him in each one of them. Great sex, but it ends with Van Damme throwing him out of the bar, on the theory that if Bobby could take him that easily, he wouldn't make much of bouncer. 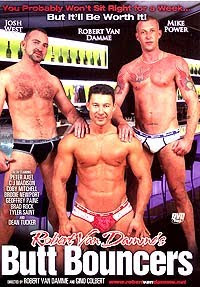 Scene two has a hot threeway between delivery guys Josh West, Mike Power and Geoffrey Paine. Scene three rivals scene one in degree of hotness, with bartender C.J. Madison putting his help Dean tucker through his paces, with a snowballing finale. DJ Brad Rock and Peter Axel follow in the next scene, with Peter as an active bottom. The final scene, the found bouncers, Tyler Saint and Coby Mitchell, hook up with Tyler bottoming in a scene that is both hot and romantic. Overall a cool and hot movie in Robert Van Damme's reletively new line of flicks.
Posted by Evan at 12:16 AM 0 comments 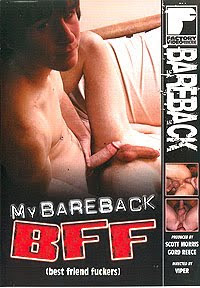 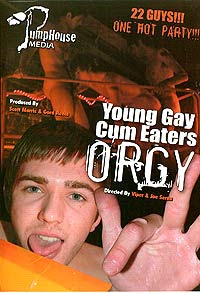 videographer (a Mr. I.M. Blind, if you must know). The video starts out with the YGCEs dancing, although some are apparently incapable of dancing (think spasming) and the rest are too cool to dance. Mercifully the sex starts and the dancing stops. 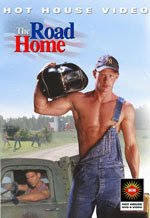 A classic in many ways, this second in the Hot House "Road" series is one of my favorites. Starring Todd Gibbs, he plays Calvin, searching for his birth parents. This takes him to the county records office where he uses hot sex as a bribe to get information out of Beau Saxon. He gets a ride from Matt Bradshaw, who he jerks off in the pick up truck, before Matt has a hot go-round with Jordan West. There's also a strange "encounter" with Ryan Idol, playing a priest, who jerks off to Todd's confessions. Todd also has a hot sex with Cole Youngblood and Tony Cummings in the barn, a great scene. Todd eventually finds out his dad had a lover and sets out to find him, happening into Marcello Reeves, Nino Bacci (in one of his first appearances) and Dan Brewer already having sex. We get to see Todd topping and this scene lets us see all of the sex without shorting anyone. The eventual reunion between Todd and his dad occurs during the closing credits. This is a great sex film, one of the early and best Hot House vids. A little plot, a lot of hot sex and Todd Gibbs to the max!
Posted by Evan at 9:55 PM 0 comments

Okay, first, a funny story. I'm reviewing this video, and my partner Fang notices the cover. His eyes get like sauers and he's asks what this video is for. "I reviewing it," I say and I think I see relief on his face, that I'm not going to "make him do " anything depicted. I'm not sure I would even if he wanted to, because, as advertised, this video is extreme. 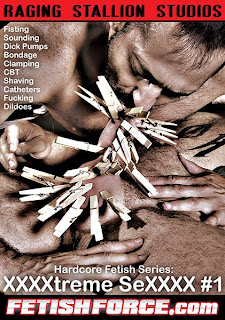 If looking at the cover doesn't send you running for the hills, this might be the video for you. As the cover says, this video runs the gamut (including "fucking" of all things). The first scene has Nick Piston and Ty Hudson, and the second has Daniel Dixx and Rick Powers. You might think that two scenes is not too long, but at two hours the scenes are quite long, and seem really long if you're not into the particular fetish. This includes extreme vacuum pumping, sounding, whipping, and deep punch fisting. If that's not your cup of tea, avoid this one; but if you're into fetish, this is everything wrapped up in one tidy package.
Posted by Evan at 9:29 PM 0 comments