It might be hard to imagine that one of porn's most masculine men was once a Girl Scout, but Buck Angel was just that. After a YouTube video, which is no longer available ,in which a Girl Scout asked people to boycott cookies becacuse of a 7 y.o. transgender girls admission Buck released a video that is gaining quite a bit of mainstream attention. 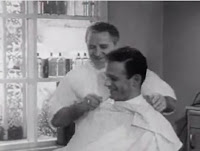 What makes this story especially disturbing is that the barber is being charged with two counts of distributing obscene material and not just for selling adult material without having the proper license or permits, which the Flomaton police chief Geoff McGraw said was required.

“We had been receiving complaints throughout the community about pornographic material coming out of this barber shop. Yesterday we conducted an undercover operation,” added McGraw.

Barber Garvin Chancery, 60, who has worked at the downtown barbershop “forever,” according to a neighbor, was selling the DVDs for $3 bucks and was apparently to even buying them back from people. He said he was sorry for any embarrassment he had caused his community and insisted that he locked up the video at night.

Under Alabama law, it is a misdemeanor for someone to knowingly distribute obscene material in the state. The penalty for someone found guilty is up to a year in jail and as much as a $10,000 fine.
Posted by Paulie at 4:14 PM 0 comments

Andrew Christian Models Get You Wet

"The View" defends same sex Marriage, even the two crazy ones that think the earth is flat.

Florida is at it again with sting operation at Palm Beach that has reported over 600 men arrested for cruising in public parks. In at least 74 of the reports, it appeared the officers were the ones who first approached the defendant and struck up conversations. Parsley’s report includes statistical revelations of the age range of defendants, where they lived, and what techniques the officers utilized to effectuate the arrests.

Only a handful of the arrests – four to be exact -- were between two men; the rest of them involved an undercover detective soliciting another man for sex using tactics that one lawyer called “disgusting” while another lawyer questioned the legality of the detectives’ behavior.

“It is clear from a review of the files that the police tactic is to approach, lure, and entice guys who are sitting alone in their car, or on a bench, start a sexually charged conversation with them, and then look for a way to arrest them,” lawyer Russell Cormican told Parsley.
Posted by Paulie at 4:43 PM 0 comments

Erection Problems? Get a Tattoo on your Cock

A 21 y.o. Iranian man has a permanent "woodie" thanks to a tattoo inked on his cock. The tattoo says "Borow be salaamat" which means good luck with you journeys and the letter "M" his girlfriends initial.

His case has been detailed in the latest issue of the Journal of Sexual Medicine. “In our case, most probably, the handheld needle penetrated the penis too deep, creating an arteriovenous fistula,” wrote the study authors from Kermanshah University of Medical Sciences in Kermanshah, Iran. A fistula is a connection between two organs or vessels — in this case an artery and a vein — that normally don’t connect.

“For eight days after tattooing, the penis was painful, and thus there were no erections,” the authors wrote. “After that, the patient noticed longer-than-usual sleep-related erections. This progressed, within a week, to a constantly half-rigid penis, day and night.”
Posted by Paulie at 4:27 PM 0 comments

For many people looking for romance, ‘fat’ can be considered a four letter word. For some, however, their motto seems to be “the bigger, the better.” On this episode of True Life, you’ll meet a young man who desires an obese mate while struggling to find acceptance in a society that immortalizes 6-pack abs.Justin loves the sense of security he gets from his super-sized boyfriend, Josh, but fears that his conservative parents dismiss their relationship as a fetish. Justin wants to marry Josh and is determined to get his family’s blessing before they walk down the aisle. Viewers will watch as Justin tries to convince his parents that his feelings for Josh are real.

Raging Stallion "Woodhshop" 3.5 spalts 107 minutes 4 scenes. This is an all no plot, all sex DVD from Hall-of-Fame director, Chris Ward. Never have utility work rooms looked so sexy with muscle studs working with their big "Wood" sticks. Not alot of dialog just rough looking muscle Men doing what they do best. Deep making out, rough sex with men who look like they are really turned on. Tons of hot cum in the fuck filled DVD. Best scene is with Tom Wolfe & Trent Locke - Tom looks better then ever with that famous big cock and Trent's hungry bottom can't get hard enough of riding Toms cock. Great camera angles of Trent getting pounded harder than a piñata. Fantastic all sex DVD that you can almost smell the testosterone in the air.