7 Y.O. Transgender Boy Gets in the Colorado Girl Scouts

Guess the Girl Scout don't have the same homophobic rules as the Boy Scouts of America who wont let you in if they even smell a hint of gayness (usually smells like CK Cologne). The Girls Scouts have stated “Girl Scouts is an inclusive organization, and we accept all girls in kindergarten through 12th grade as members. If a child lives life as a girl and the family brings the child to us to participate in Girl Scouts, Girl Scouts of Colorado welcomes her. Girl Scouts of Colorado respects the privacy of all girls and families we work with. When a family requests membership for their daughter, we do not require proof of gender, we respect the decisions of families.” 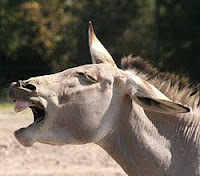 Here is a completely accurate reenactment of how this all shook out: Man on the ground lacing into one of donkey's penetrable orifices. Cops arrive to the scene, likely in shock. Officer: "Sir, are you aware that fucking this donkey is illegal?" Man: "Whoa whoa whoa, I'm fucking a donkey? (looks down to see what his cock is currently inside of) Oh my god, I'M FUCKING A DONKEY! I don't know how this could have happened." Officer: "What do you mean, sir?" Man: "Well, when I left the club, this donkey was a hooker. I swear. I paid her $20. I have no idea how she turned into a donkey!"

Sunday Moyo, 28, from Mandava township in Zvishavane, was charged with bestiality on Monday. Zvishavane magistrate Mildred Matuvi heard how Moyo was found by police officers on routine patrol performing a sex act on the animal inside his yard just after 4AM last Sunday.

The donkey, which had been tied by the neck to a tree, was lying on the ground. Although he was not formally asked to enter a plea, Moyo admitted committing the crime but told the magistrate an enthralling tale which had the court in stitches.

“Your worship, I only came to know that I was being intimate with a donkey when I got arrested,” he began. “I had hired a prostitute and paid US$20 for the service at Down Town night club and I don’t know how she then became a donkey.”

The magistrate remanded Moyo in custody to October 27 and also ordered that he be examined by two government psychiatrists.
Posted by Paulie at 4:07 PM 0 comments 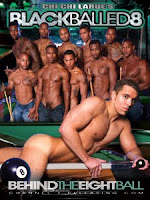 Starring newcomer and insatiable bottom Dylan Hauser, the movie gives new meaning to the term, "Behind the 8 Ball". The cock-hungry Hauser takes on 10 well-hung black studs, including superstars Hot Rod, Scott Alexander, Angyl Valantino, Aron Ridge. Also joining the pack of gangbangers are Jonny Rock, Trey Turner, Lawson Kane, and newcomers Sean XL, Tokyo and Robert Anthony. They all come together in one of the nastiest interracial gangbangs ever caught on film.

In addition to the ass pounding Dylan receives from the ebony studs, he has a mind-blowing intimate moment with a pool cue, which is not to be missed.

What Happens when you are in the right place, right time with a very hot guys... You are a Lucky Fuck. 10 hot guys in 5 different scenes filmed in New York makes this one hot DVD you will watch over and over. The DVD also has the usual Hardcore trailers, Lucas Online, Scenes but also has Meet the Men, where we learn that Preston is looking forward to some rough sex with Ricky Sinz and will make sure that Preston won't walk right for 14 days and Sam Colt who was interviewed right after shooting his load says John Magnum was a great fuck.

All 5 scenes are super hot, but you will especially love newcomer Edin Sol, who gets pounded by Lucas Exclusive Avi Dar. Working for Lucas has lots of perks when Avi is walking out of the studio with a box of Dildos and Butt Plus and Edin runs into him with his bike and all the sex toys are dumped on the street. It does not take much for Edin to follow Sexy Avi back to the studio where he shows him around the studio "bedroom" and fucks him rough and hard he holds on for dear life to the headboard till he shoots in Edin mouth. Edin sexy slim body with a six pack will sure to be a star after this scene. You will also love the Ricky Sinz Fucks Preston Steel, powerful piston fuck where after some hot foreplay in the shower together Ricky says "Get the fuck on the bed.. fuck that kissing shit and get on my dick" and Preston Does just that.
Great pairings, with some very hot studs and camera shots that give the best views of the sex makes this a 4 Splats rating.

TSA Agent Finds Vibe, Urges Passenger to 'Get Her Freak On'

Writer Jill Filipovic got a little surprise when she arrived at her hotel in Dublin on Monday. She'd packed well for her trip, including all the basic necessities—like her vibrator—and when she opened her bag, what should be sitting on top but a form from the Transportation Security Administration (TSA) disclosing that her luggage had been examined before her flight had left Newark (NJ) International Airport.

But what drew her attention was some writing in the margin of the form: "GET YOUR FREAK ON GIRL."

Fortunately, she got over the humor of the situation and began thinking about the "total violation of privacy" and "wildly inappropriate" parts, and told ABC News that she would probably be "filing a complaint with the TSA once she returns to the U.S."

For its part, when ABC contacted the TSA for a comment, a spokesperson for the agency downplayed the event, claiming that TSA is only "one of several entities" that may rummage through checked baggage, and stated that so far, there is "no concrete evidence who wrote the note."

Attorney Jonathan Turley agreed with Filipovic, writing, "If true, it is a pretty serious breach of privacy to send jokes or taunts to passengers based on their personal items," but noted, "However, what would the damages be in such a case, particularly given the right to inspect and Filipovic’s admission that she found the note funny?"
Posted by Paulie at 5:20 PM 0 comments

Last night was one of my favorite here in D.C. the annual High Heel Race the most fabulous drag street fashion show around.

On a quest to make the perfect Male Masturbator California Exotic Novelties has released new Rotator Masturbator. A handheld masturbator that not only rotates but spins too. It features 120 non jamming beads that rotate under a textured silicone sleeve. It has seven functions of rotation, including reversible patterns. An independent five-speed controller has an easy on/off switch that is intuitive and ergonomic. It’s waterproof and easy to clean.

“Our design team did a lot of research to create a masturbator like no other,” said Susan Colvin, president of California Exotic Novelties. “One that is substantial, provides ultimate satisfaction, and is masculine in design. The Rotator Masturbator is all that and more. Men like technological gadgets and the Rotator Masturbator gives them seven functions and five speeds to play with. It delivers sensation like nothing else — the rotating beads have to be experienced to be believed. Guys are going to love it!”
Posted by Paulie at 4:11 PM 0 comments

Wolverine is a Big Bottom

No... not Hugh Jackman (we already know that). From the-gutters.com is "A Completely Accurate Retelling of X-Men Schism, look at the "scratches" above the headboard Wolverine must have been riding Scott hard.
Posted by Paulie at 3:47 PM 0 comments

The public has voted on the 3rd HustlaBall Award and the winners are:

Travis gets this film off to a cracking start in scene one, where he’s partnered with a buzzed-headed bottom boy that eats up Travis’ cock in both ends like he hasn’t seen a raw cock in years.

Zimbabwe bans condoms in prisons because gay sex is illegal

Prisoners in Zimbabwe are being refused condoms despite high rates of HIV because homosexuality is illegal. The Prison Service said last week that condoms could "encourage" inmates to have gay sex. The Zimbabwe prisons hold 13,000 inmates.

Pink News reports that HIV activists have been calling on the Prison Service to do more to combat the disease.

Under laws passed by President Mugabe in 2006, it is illegal for two members of the same sex to kiss or even hold hands.
Posted by Paulie at 8:17 PM 0 comments