See the GayVN award show Live via the Sword

What's a gay man to do? I feel like Bugs Bunny being done in by his love of carrots. Representative Arron Schock (R-IL) is really hot but is a republican douche. 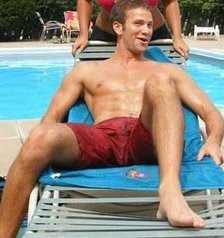 The animal side of my brain says: 'hot guy!' and the intellectual side of my brain says 'ugh, repiglican.' Look at the picture taken a few years ago. Pretty hot, right? Too busy to date, no girlfriend, gay rumors from constituents, great body, nice hair. But then there's his positions on abortion, gay rights, including marriage; spouting the republican party line. My brain is all mixed up.
Of course, it's not just young Aaron, I sometimes get these feeling about Eric Cantor (R-VA). (He's cute; I hate him; kinda hot; kinda a dick).
Back to Aaron. TMZ has been stalking Aaron outside of Congress asking him about partying in D.C. and how his abs compare to President Obama. Howard Kurtz interviewed him on CNN's Reliable Sources and he basically said it was all good. Stay tuned to see what comes out in the wash.
Posted by Evan at 7:33 PM 0 comments

The former judge who lost his position, was sent to prison and cut off from his pension because he used a penis pump in court has decided to appeal a ruling that revoked his retirement pay.

Donald D. Thompson had been convicted on four counts of indecent exposure and sentenced to four years in prison for using a penis pump underneath his robe during court hearings. He served 20 months and was suspended from law practice.

Thompson was receiving $7,789 a month when his benefits were cut off on grounds that his conduct violated his oath of office. He had spent almost 23 years on the bench and had served as a state legislator before retiring from the court in 2004.

A court employee told police that she saw Thompson use the device almost daily during the August 2003 murder trial of a man accused of shaking a toddler to death. A whooshing sound could be heard on an audiotape of the trial.

Police built a case against the judge after an officer testifying in a 2003 murder trial saw a piece of plastic tubing disappear under Thompson's robe. During a break, officers took photographs of the penis pump under the desk.

Detectives later found semen after checking the carpet, Thompson's robes and his chair behind the bench, according to court records.
Posted by Paulie at 1:59 AM 0 comments 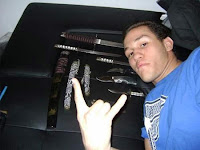 New York City Police say a 16y.o. teenager John Katehis is in custody in the brutal slaying of veteran New York City radio reporter George Weber. The two met via an ad Weber had placed on Craiglslist looking for “rough sex” with a Hispanic man.

Weber’s body was found Sunday. His ankles were bound, and he was stabbed about 50 times. Wounds on his hands indicate he tried to fight back.

Katehis writes in his MySpace profile "I like to do crazy and wild things.im like an adrenaline junkie, I'm always looking for a big thrill, I'm a big risk taker and like to live life on the edge.I am an Extremist, an Anarchist,and a Sadomasochist. As long as you show respect for me i will show respect for you, if you disrespect me, then i will fucking break your neck." The photo above from his page Katehis is posing with his knife and sword collection.

Weber worked at WABC in New York for 12 years as the on-air reporter for popular shows such as “Curtis and Kuby.” He also had worked at stations in San Francisco, Los Angeles, Denver and Pennsylvania.
Posted by Paulie at 11:47 PM 0 comments

Gay adult production house Titan Media has signed an exclusive contract with newcomer Will Parker. At 22 years, he is the youngest ever TitanMan.

"Will came to us through our website a few weeks ago," Brian Mills, director and studio principal, said. "At his young age, you'd expect him to be more of a boy. While his face may say innocent, his amazing gymnast physique combined with his piggy sexual appetite makes him a perfect fit as a TitanMan."

Parker is a Florida native. He is set for featured roles in a pair of upcoming productions: the next installment of the TitanMen Folsom leather/fetish line, and a vignette for the studio's nascent extreme fetish label directed by performer Tony Buff.

Among his first personal appearances will be meet-and-greets during International Mr. Leather weekend in Chicago at the end of May.

"I am still in awe of all that has happened so quickly,” Parker said. It's always been my fantasy to be a part of a Titan film, and now I am living that fantasy. I can't wait to see what comes next."

"This girl's gonna be Sarah [Chalke, who plays Dr. Elliot Reid on the show],” Braff said, holding up a picture of Ashlynn Brooke. “I think it’s a good match.”

Gay Bashing at a Sports Bar: What Do You Do?

To test Americans' increasing open-mindedness, we staged a verbal gay-bashing scenario at a local sports bar in Linden, N.J. hired actor Vince August plays a homophobic patron. Dusty St. Amand and Dominic Benevento, a gay couple in real life, played the targets of his slurs. Two additional actors, Traci Hovel and Brad Lee Wind, played a heterosexual couple at the opposite end of the bar.

A group of eight gay-porn models has taken a stand for safer sex in a catchy public-service announcement they created and posted to YouTube.

Andy Kay, Phillip Ashton, Jayden Taylor, Krist Cummings, Jacob Wright, Zack Randall, Ryan Conners and Angel Benton said they are using the tagline "Safe Sex is Hot Sex" to make a point, and they hope other performers and studios will sign on to the effort.

The message is simple, the men said. So is one potential answer to the problem.

"It's just like it is everywhere else: politics and money," the joint statement noted. "A company might lose models if they tested and found them to have HIV or an STD. A company would also lose large sums of money due to testing costs.

"This message is a message from the models themselves, saying that something just isn't right here. Straight companies work almost solely with testing and extensive databases to make sure they maintain a safe environment. Most gay companies do not.

"We've made our stand," the statement noted. "It's up to the rest of the community now to make theirs."
Posted by Paulie at 5:49 PM 0 comments

Big Cock that Can be seen from Google Earth 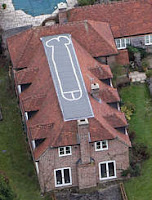 18yo Rory Mclnnes painted a 60 foot cock on the roof of his parents million pound house in the UK. For 12 month the giant "Willy" was on the roof near Hungerford Berks before a helicopter pilot spotted it and took photos.

Rory’s Mother Clare, 49, said: “We don’t want any more children, so the idea of sleeping under a giant fertility symbol is rather worrying.”

“When Rory gets home he will be given a scrubbing brush and white spirit and he can go and scrub it off.”
Posted by Paulie at 5:42 PM 0 comments

Winner of “RuPaul's Drag Race” and After show Gets UGLY

We all know her as “Cameroon” Bebe Zahara Benet nabbed the top prize in RuPaul's Drag Race. Now she's ready to take a victory lap, bringing her international brand of drag across America this summer.

All Hell broke out when the judge Santino came out and the Drag Queens attacked. Shannel couldn’t say enough good things about herself and how great she is and Tammie went off and made the best face. Rupaul had to go off and “read” to Queens. Check out the clip.

Donahoe's high school coach helped him make the jump from Nebraska, which dismissed Donohoe and his teammate based on NCAA rules banning the use of photos for personal gain, along with a host of other charges. Donahoe made a few thousand dollars modeling for the site FratMen.tv, but the NCAA made him give it all back.

"I believe it was unfair for Nebraska to dismiss me from the team," he said. "For one, there's plenty of athletes throughout the University of Nebraska who have had DUIs and who have been in fights and are still playing. But I guess that's OK. Posing nude, I guess, is worse than someone drinking and driving and risking someone's life, in their eyes."

"I am straight, but on the forums people make a lot of gay jokes about me," he says. "I'm not too concerned. They can talk about me all they want, it doesn't matter. If a guy wants to be with a guy, who cares?"

Finally, Donahoe said that he's happy to tell his story, no matter how embarrassing it is, because it might help bring more attention to the beleaguered sport of amateur wrestling.

"It's not like other sports," he said. "It's not something that you go out and do for fun, because if you go out there and someone's tougher than you, you're going to take some whipping. But once you become a wrestling fan, I'm pretty sure you'll always be a wrestling fan."
Posted by Paulie at 12:07 AM 0 comments 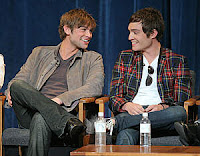 Star of TV's Gossip Girl, Ed Westwick, has again denied he is gay, calling "ridiculous" claims of a relationship between he and co-star Chace Crawford ...

In the latest edition of Rolling Stone, the 21-year-old actor says rumours of more than just a simple bromance between he and Crawford are “fucking ridiculous."

He tells the magazine, "It's funny because I love this fucking dude dearly.

"I would die for this fucking dude. He's my brother. But, by God, we are so into our fucking women it's ridiculous."

Maybe he should stop sucking his cock and we will stop calling you gay. :)
Posted by Paulie at 12:01 AM 0 comments

The guy that had people calling for Adams' resignation is showing us all his glory in the new Unzipped. The May 2009 issue of Unzipped will go on sale on April 17. David Kalmansohn, editorial director of Unzipped Media, said the edition "may be the most highly anticipated issue in the magazine's history.

Kalmansohn said the young man in his interview "opens up about his relationship with Adams and how the story broke, as well as his own sex life and the kind of men he finds most attractive."

More importantly we get to see how Johnny Hazzard celebrates Mother's Day.
Posted by Paulie at 11:56 PM 0 comments