Get Ready for a ass stuffing. A former mainstream model and semi-pro basketball star turned award-winning adult performer, Flash Brown is making his adult novelty debut with his namesake dong for Icon Brands.

Aside from his extraordinary 11-inch size, Brown is a rare performer who’s able to captivate his co-stars as well as his fans. “You can tell he’s an athlete—he’s got the body and he’s got the moves," said Icon product development chief Rebecca Weinberg. "He's just a very sexy guy."

Made in the USA and molded directly from the performer—who won the Urban X award for Best Male Newcomer in 2010—the piece features a strong suction cup for hands-free enjoyment and hand-painted detailing for authenticity.
Posted by Paulie at 4:32 PM 0 comments

Only Boy Crush Studios would release a porn based on Justin Bieber on his 18th Birthday. Bustin Beeber: Never Say Never - We all knew that young twink sensation had a kinky side and on his 18th birthday, we get to see just how far this guy will go. Bustin Beeber is a barely-legal teen pop star and when another gayhttp://www.blogger.com/img/blank.gif rumor circles the tabloids, Beeber decides to do something about it. Starring an incredibly convincing Kyler Moss as Bustin Beeber, this feature shows exactly what this boy's made of as he gets fucked by new exclusive: Scott Alexander along with ass-pounding scenes with big-dicked hotties like Conner Bradley, Patrick Kennedy, and James Redding. Two extra musical bonus scenes are included in the movie making it the complete package for any beleeber . . . or non-beleeber.

Literacy has never been so sexy!
Posted by Paulie at 4:14 PM 0 comments

135 mins 6 scenes (bonus) 10 Muscle Studs 4 splats - Madrid Bulls, from Stag Homme and Raging Stallion will get you excited from start to finish with six very interesting, creative and scorching hot "artistic Vignettes". Or what we call jerk off fantasies. Cover Boys Manuel Lopez and Adrian Toledo look http://www.blogger.com/img/blank.giflike two meaty bouncers who you hope will molest you in an alley. This is then ninth DVD from Damien Crosse and Francesco D'Macho who find the sexiest men in Spain. While it is almost impossible to pick a favorite scene from this fantastic DVD, Scene 2, "Haleeb, with Damien Crosse and Eliad, would edge out the others. This Arab-themed scene begins with the very hot, dark skinned, Eliad in a traditional white robe rubbing his hard cock and Damien across the stream rubbing his. Eliad cools off by pouring some water over himself, creating an outline of his huge cock . They both start to suck each other off and it is not long before Eliad is on all fours getting milk poured on his ass and gets fingered and ready for a pounding. It is both hot and very odd to see the milk both before and during the fucking until you find out that "Haleeb" means milk. They stand up for the climax and some great camera angles shoot up from below to show them pounding. With some primal grunts Damien blows all over Eliad's face then Eliad jerks off in Damiens eye (that stings) while slapping Damien's face with his fat cock. This DVD will have your erotic imagination running in overdrive! 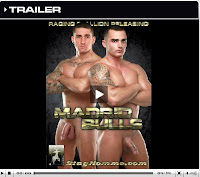 Get ready to fall into the "Cock Trap" with the compact sexy Brent Everett. While exploring the depths of a stylish, high-end sex club, muscular newcomer, Russ Ryan, finds himself ensnared in a COCK TRAP…a firestorm of man sex from which no man wants to be released.

Featuring C1R Exclusive Brent Everett in a scorching scene with Newcomer of the Year, Riley Price, and highlighted by the ever increasing animalistic masculinity of Cameron Marshall,

Gay Marine Brandon Morgan spoke with MSNBC's Thomas Roberts about his homecoming photo, how it helps break stereotypes about gay people, what the photo might mean to kids who are struggling with sexual identity, and what he has to say to people who have said they are offended by a photo of two men kissing.

Visit msnbc.com for breaking news, world news, and news about the economy

WATCH: First Gay Kiss on 'Days of Our Lives'

The MMA blogosphere has lit up and been buzzing about Cochran since the news initially broke last summer, but picked up steam with the reality show’s upcoming premiere.

“Danny” has appeared on SeanCody.com since 2008 in both solo scenes and in hardcore scenes with male performers.

According to UFC President Dana White the organization would be accepting of a homosexual fighter.

“I’ll tell you right now, if there was a gay fighter in UFC, I wish he would come out,” White said. “I could care less if there’s a gay fighter in the UFC. There probably is and there’s probably more than one. I mean, it’s 2012. Give me a break.”

The Ultimate Fighter Live is an MMA reality show that premieres March 9, and is a quest to find the UFC’s next star. Cochran is one of 32 contestants. He earned a spot on the show after defeating World Extreme Cagefighting champ Jamie Varner at last year's Titan Fighting Championship 20. The 25-year-old Nebraska native holds an 11-2 pro MMA record.

"I think it's a little bit courageous for both of us," he said of the UFC's decision to include him on the show. "I could just hide in a hole and no one would know except for the people close to me. And to them, I was up front. I let them know right away so it wasn’t anything that could come back and bite them in the butt. I think maybe they respected that a little bit. I think some people judge against it, some people will be OK with it. Some people will want me to get my butt kicked, and hopefully others will respect what I'm trying to do."
Posted by Paulie at 10:32 PM 0 comments

According to reports on Facebook and Twitter, Dror Barak, aka Roman Ragazzi has died of an apparent suicide on February 23 at the age of 38. Barak most recently appeared in a fashion story in the February issue of Out, titled "New York's Finest," photographed by Marcelo Krasilcic.

he former Israeli military trainer was outed in 2007 by New York Post’s Page Six while working at the Israeli consulate, the ensuing scandal caused him to resign. Later that year, he started a personal training and fitness company called Freedom Fitness.

Raging Stallion head Chris Ward (who named Roman Ragazzi Raging Stallion’s Man of the Year in 2008) said, “He was probably the hottest man I have ever filmed—a massive man of pure beauty, intelligence and kindness. He was perfect in every possible way.”

Barak's boyfriend says "All I would really like to say is that Dror was not some drug addicted, party obsessed, former porn star. He was a hard working man who built a very successful personal training business with very successful and dedicated clients. He was the loving, kind, gentle, and beautiful inside and out. I caution anyone who would crucify and judge someone so soon upon their passing for something they did in the past that is in no way connected to their current life. Dror was a beautiful kind human being who loved his work, loved his dog Diesel and loved me and his brother Justin Fauci very much. He was a simple man who enjoyed nothing more than being curling up on the couch to watch a movie with his dog and his boyfriend."

If you ever wanted to see the Largest Gay Parade with some of the hottest men from down under now is your chance. Starting March 4th 3:30am EST you can watch the Mardi Gras Parade plus the behind the scene and a hour parade highlights. Go to MardiGrasTV.org.au to see one of the gayest events in the world.