David Henrie 20 y.o. star of Disney's Wizards of Waverly Place has popped up on the very gay, very nasty (in a hot way) GuyswithiPhones.com. Unfortunately he was fully clothed in a wife beater with his budging muscles taking his photo in a mirror, however all the other guys on the site are naked. Bet the mouse is very mad at this hottie.
Posted by Paulie at 12:18 AM 0 comments

Joy Behar interviews Margaret Cho, not only very funny but a very eloquent speaker about equal rights for everybody.

29yo Fitness Model the Hottest Santa EVER! 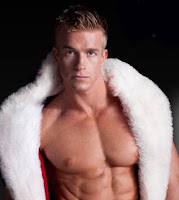 A new study by Tufts University shows that people can identify others' sexual orientation after looking at them for just seconds.

According to ScienceBlogs.com, researchers used college students in a test to accurately identify gay men based on 90 photos from dating websites. None of the men in the photos — half of whom were seeking male partners, the other half seeking females — had facial hair, jewelry, glasses, or other accessories.

The study's authors said the reason people may have keen gaydar is so heterosexual women can find a suitable mate and so that men can easily identify their competition.
Posted by Paulie at 8:36 PM 1 comments

Raging Stallion's Man of the year Austin Wilde gives it up his tight ass to Dustin Michaels from Extra Big Dicks in Raging Stallions new Southern Pride: Boys in Heat.
Posted by Paulie at 8:07 PM 0 comments

Tila Tequila is Engaged to a Woman

What could make Tila Tequila the self described bisexual pick a woman to get married to? A Ton of Money! If you thought she whored herself out to get a bisexual dating show on MTV where she drooled over the muscle bound guys with big cocks and kinda ignored any of the girls (except for the one that looked just like a boy). Her new Finance is the heiress to Johnson & Johnson fortune.

Tequila declared after showing her 17-cart diamond ring “My baby takes care of me. Beat that, J. Lo.; beat that, Khloe [Kardashian] and Lamar [Odom].” “We're what you call U-Haul lesbians, where you meet and fall in love and move in the next day and have kids".

Who says being a media whore doesn’t pay.
Posted by Paulie at 12:19 AM 0 comments

I have to say one of the only reasons to watch MTV's newest train wreck is Italian Stud, Pauly D. After just two episodes of the MTV reality series, he and a housemate hit the sheets, after which she announced that his manhood is pierced.

"I wasn't expecting that it was being filmed," Pauly D told E! Online’s Mark Malkin. "But I don't mind. I mean, it's whatever."

"I didn't tell anyone about my piercing," he added, "but I'm not shy."

Are you Tired of being a Bottom?

Who could ever be over being a power bottom? A very funny parody set to "Tardy for the Party"

When Did it become Defamatory to Be Called Gay? "Burger" from Sex in the City Ron Livingston has filed a lawsuit against an anonymous Wikipedia editor for repeatedly altering his entry on the free encyclopedia to claim Livingston is gay.

Livingston’s lawsuit against “John Doe” will likely give him the power to subpoena Wikipedia and Facebook to find out the real perpetrator or perpetrators.

Ben Sheffner, a Hollywood copyright attorney says "It’s a very interesting issue; Obviously many people don’t like being falsely called gay, but some gay rights activists argue that to permit a defamation action for a false accusation of homosexuality perpetuates the harmful notion that there is something wrong, or shameful, about being gay. Indeed, a New York federal court recently ruled that a false accusation of homosexuality is not defamatory per se."

Are you telling me that this is the worst thing he has been called, get a sense of hummor Livingston.
Posted by Paulie at 1:00 AM 0 comments

Give it a couple of years and I bet he will be begging to jerk off for money.
Posted by Paulie at 12:52 AM 0 comments

Gay Santa Gets Conservatives Panties in a Bunch

I know some uptight assholes that are going to get some reindeer poop in there stockings. A one man show about Santa Claus having a relationship with a Italian toymaker Geppetto has the fucked up group "Focus of the Family" all freaked out.

A benefit performance of the satirical show aided the Gay, Lesbian, and Straight Education Network, which works to end antigay harassment in schools. Antigay conservatives have run with this information, using it as ammunition in their campaign against Kevin Jennings, the assistant deputy secretary for safe and drug-free schools for the Department of Education. Jennings, a gay man, founded GLSEN.

"Yet more evidence revealing the dark side of GLSEN–the Gay, Lesbian and Straight Education Network—has surfaced. (GLSEN is the group founded by President Obama’s 'safe school's czar,' Kevin Jennings.) At issue this time is a GLSEN fundraiser featuring a theatrical play called Santa Claus Is Coming Out!" Focus on the Family education analyst Candi Cushman wrote on a Focus on the Family blog December 3.

Cushman also described promotional materials related to the play as sexually suggestive, though the link she provides leads to a photo of a Santa covering his face. "We have not marketed this play with sex," Solomon told Instinct magazine. "The play is not about sex. The play simply asks a hypothetical question. 'How would the world react, if Mrs. Claus were revealed to be a beard, and that Santa Claus was actually a gay man?'
Posted by Paulie at 12:43 AM 0 comments

Different kind of Drag show meant to turn stereotype of beauty on its ass.