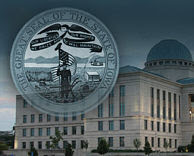 The Iowa supreme court ruled unanimously this morning that gays and lesbians in the state have the right to marry, the Des Moines Register reports.

“The Iowa statute limiting civil marriage to a union between a man and a woman violates the equal protection clause of the Iowa constitution,” the justices said in a summary of their decision.

According to the decision, “the language in Iowa Code section 595.2 limiting civil marriage to a man and a woman must be stricken from the statute, and the remaining statutory language must be interpreted and applied in a manner allowing gay and lesbian people full access to the institution of civil marriage.”

The decision makes Iowa the first Midwestern state to allow same-sex marriages, and only the fourth in the nation to have achieved marriage equality. (Marriage equality currently exists in Massachusetts and Connecticut. California, which allowed same-sex marriage for five months in 2008 after a supreme court ruling in its favor, is currently in limbo over the Proposition 8 voter initiative to overturn it, now back in the court's hands.)
Posted by Paulie at 4:23 PM 1 comments

Bradley a fan-farorite who starred in Rascal Hits like “Starting Young 2”, “Wrong Side of the Tracks”, and “Sized UP”

In his new venture call “Tread Heavy” his is joined by Johnny Hazzard, Blake Riley and newcomer Nelson Troy. The film's moody leather and bondage theme capitalizes on the current trend in gay adult towards fetish play of all flavors. Nice to have him back !
Posted by Paulie at 1:48 PM 0 comments

Coverboy of Unzipped will appear at Downtown Portlands Fantasy for Adults Only store to sign copies of the mag and whatever else you pull out of your pocket.

It has been a busy couple of weeks for Breedlove, who entered the spotlight this year after Mayor Sam Adams admitted he had lied when he denied having sex with Breedlove when Breedlove was 18.

Breedlove’s latest star turn began with the online release of the Unzipped cover, then a quick stint as guest judge for Cockfest 09.
Posted by Paulie at 9:39 PM 0 comments

Sweden will allow homosexuals to legally marry from May this year after parliament on Wednesday voted overwhelmingly in favor of the move.

The change in the law, which currently allows gay couples to register unions but not formal marriage, comes into force on May 1 this year under the timetable set out in the bill.

Scandinavian countries, known for their liberal attitudes toward gays and lesbians, were among the first countries in Europe to grant same-sex partners the same rights as married couples.

The new legislation eliminates legal distinctions between heterosexual and homosexual spouses, but does not force dissenting clergy to wed gay couples.
Posted by Paulie at 5:24 PM 0 comments

Think of all of the young jocks that now have "blue balls" (send them my way).

A scheduled screening of Digital Playground's "Pirates II: Stagnetti's Revenge" at the University of Maryland has been canceled after state lawmakers threatened to cut funding to the university if it went on as planned. University President C.D. Mote Jr. decided to cancel the screening, which had been approved by a student programming committee, after a debate this morning in the state Senate.

"That's really not what Maryland residents send their young students to college campus for, to view pornography," Senate President Thomas V. Mike Miller said. He acknowledged the legislature shouldn't get involved in censoring movies but also said the state General Assembly is not going to support screening hardcore pornographic movies on a state campus paid for by taxpayer dollars.

As of Wednesday, the student union at Maryland had not received any complaints about the screening, but reporters found that many on campus were unaware that it had been scheduled. Digital Playground provided the film to the university for free, so no student fees or state money was used to bring it to campus.

"We thought this would be something fun for the students to do, especially since we're getting close to the end of the semester," Cunningham said. "We're a college movie theater and we thought it would bring out the students."
Posted by Paulie at 5:20 PM 0 comments

The Hunky Visconti Triplets have partnered with Fleshlight in a wide ranging promotional campaign.

The three 20-year-old identical siblings — Jason, Jimmy and Joey — are exclusive to European all-male studio Elite Male. Fleshjack made the announcement over the weekend to coincide with the GAYVN Awards in San Francisco, which the Viscontis attended.

"We are thrilled to affiliate ourselves with the one-of-a-kind Visconti Triplets," Fleshlight CEO Steve Shubin said. "This gives us the ability to offer our customers a fantasy experience like they have never imagined."

The brothers will be tagged as "the first official 'Fleshjack Boys' and will be marketed through our massive affiliate network," Pacheco added. The new line is expected to launch in early summer.

The Viscontis are currently onscreen in "Brotherhood Secrets" and recent release "Shameless Boy Toys." They maintain an official membership site at ViscontiTriplets.com
Posted by Paulie at 11:18 PM 0 comments

Cuba has launched its campaign against homophobia, seeking respect for freedom of sexual orientation, under the slogan 'Diversity is Natural' ...

The campaign - headed up by director of the Cuban National Center for Sex Education and daughter of Cuban president Raúl Castro Ruz, Mariela Castro - will try to contribute to "the education of society in general, with an emphasis on university students, about respect for people's free and responsible sexual orientation and gender identity, as an exercise in equity and social justice."

CENESEX "cannot do this work on its own, which is why we have called on the youth of the country, who will become the future professionals and leaders of society," said Castro.
Posted by Paulie at 11:10 PM 0 comments

Yes, this weekend included two, count 'em two, awards shows, near and dear to the gay community. First up, as Paulie stated on Friday, the GAYVNs were Saturday. A full list of the winner is found here. More on our next porncast. For a really good (and funny) write up about the ceremony, including comparisons to the Oscars, Queerty fills us all in. Queerty also a write-up on the controversy between Michael Lucas and Brent Corrigan. (We called it!)

For the non-porn party people, the GLAAD New York Media Awards were also held last weekend. A good report, with a list of winner, is here. Award recipients include: Suze Orman, Phil Donahue, and Tyra Banks. The LA version kicks off in three weeks.
Posted by Evan at 9:09 AM 0 comments