Now this is a coach that would have made me love sports.

100% Twink from 8Teenboy - We've seen some all-star twinks walk through these 8teenboy studio doors. Fast forward to 2011 and meet the new cast of 8teenboy super-star big dicked twinks Sencer Keve, Derrick Porter and Josh Bensan. We've paired these newbies with our most passionate tops Skyelr Bleu and Brycen Cox for a boy banging you won't soon forget.
Posted by Paulie at 2:52 PM 0 comments

BBC Torchwood Will Not Apologize for Gay Sex Scenes

A gay sex scene on BBC's Torchwood between actor John Barrowman and another man received 500 viewer complaints amid 3.4 million viewers. The episode aired last week in the U.K. — the scene was a flashback featuring Barrowman's "omnisexual" character Captain Jack Harkness in bed with an Italian immigrant in 1927. The show, which airs at 9 p.m. in Britain, has included repeated gay romance story lines. But this scene, reportedly at seven minutes, drew attention for lasting longer than others and being more explicit.

The BBC released a statement saying, “We aim to depict sexual relationships in an honest and realistic way. These scenes are not meant to cause offense.”

Check out the Clip from Torchwood that got everybody in a tizzy. I have see more wood from the "Bachelor" with two girls in a hot tub. Good for the BBC for not caving in to the bigots.

Cher will Cut you Bitch

I don't know what all the fuse is about Chaz Bono (except that awful beard) appearing on Dancing with the Stars but as always the Christian Rights panties are in a bunch.

All those trans phobic people assholes will have to watch out for Cher. She tweets "lovelies! Chaz is Being Viciously Attacked on Blogs & Message boards about being on DWTS!This is Still America right ? It took guts 2 do it."

"Can u guys check out sites & give him your support ? BTW ...Mothers don't stop Getting angry with stupid bigots who fk with their children!"

Oscar De La Hoya Drugs Made him Do Drag 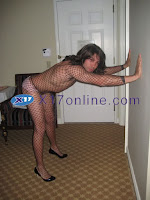 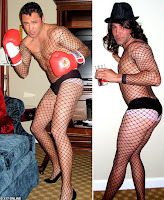 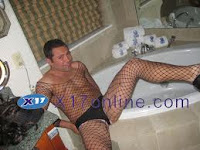 I don't know what drugs the Champion boxer did to make him wear such tacky fishnets, but Oscar is finally coming clean for those photos from 2007 in drag. "Let me to tell you, yes, yes, it was me. I am tired now of lying, of lying to the public and of lying to myself." he says. He blames cocaine and alcohol addiction which he says he has since conquered.
Posted by Paulie at 1:44 PM 0 comments

The Obscene Diary of Samuel Steward

The Museum of Sex, New York City is hosting "The Obscene Diary of Samuel Steward" A graphic look on how gay men having sex in the 1950's. I wonder if they have glory-holes in the bathrooms in the Museum of Sex.

This could only happen in D.C. where closeted Republicans fuck their male pages and police shoot people for throwing snowballs, ahh your tax dollars at work. An off duty police officer was arrested Friday for driving while intoxicated and firing his weapon at a group of transgender people. According to police, the off-duty officer became involved in a verbal confrontation with five individuals that led to the shooting. There was also a collision involved, though officials were not sure at what point it occurred.

One person was hit by the officer’s bullets, sustaining non–life-threatening injuries. Two others were hurt as well, but police say they are still investigating the cause of those injuries.

Though Bill Miller, a spokesman for the U.S. Attorney’s Office, said authorities were determining whether further charges will be filed, police say there is no evidence at this time that the incident was bias-related.
Posted by Paulie at 1:40 AM 0 comments

Collin O'Neal tells CBS Miami about his dismissal as teacher.

She said she notified adult film production companies across the San Fernando Valley on Monday morning that a performer had tested positive and urged them to temporarily halt productions until further tests were completed.

Duke said company officials she spoke with -- including those at well-known studios, such as Hustler and Evil Angel -- agreed to the temporary shutdown.

Duke said she could not release the performer’s name, age or gender. Further testing will likely be completed within a week, she added.

Her group will notify performers who had sex with the potentially infected person so they can get tested.

"Retesting and confirmation is underway as is the process of identifying and testing first- and second- generation partners," she said, referring to those who had sex with the person who tested HIV positive or with one of that person's sex partners.

It was not clear how Duke's group was doing that. She noted in a statement released Monday that the performer tested positive at an out-of-state facility “that does not appear to have protocols or procedures in place for medical follow-up (including generational testing).”

Los Angeles County health officials and state health regulators, who have been involved with such testing in the past, were not notified of the test because it was performed out of state, Duke said.

Adult film performers must be tested every 30 days and show proof of a clean test before they perform, according to voluntary industry standards.

AIM Medical Associates had been operating the industry's database of test results before it closed in May while fighting a lawsuit that alleged it revealed performers' private medical information. The new database will tell producers and agents only whether performers are available for work, not their specific test results as AIM had done, Duke said.
Posted by Paulie at 5:39 PM 0 comments

Finally there was a reason to watch the most boring sport ever, cute naked men, a Lutheran College didn't see it this way. Bethany College Suspends the entire 15 member golf team for their "Calendar Girl" (covering all their junk) photo. The coach chided the team for not upholding the reputation of the team and college, but the team has appealed the coach’s decision to the college president.
Posted by Paulie at 5:30 PM 0 comments

Guess it was his Photo

The Republican Puerto Rico Politician Roberto Arango, who couldn't remember if he took a photo on all 4's and post it on Grindr last week resigns. The statement called the circumstances leading to the senator’s resignation “unfortunate,” adding that “I am confident that with the resignation of the legislature [we] can terminate this case and focus on the discussion of issues important to our people.”

Another Republican bites the dust, though he did have a sweet ass.