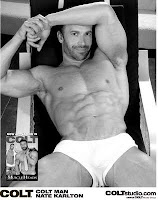 The sexy and newest Colt Man Nate Karlton will have his first live appearance at the NC Charlotte Eagle. Nate appears on the cover of both MuscleHeads and the newest Colt Minute Man 32.
Posted by Paulie at 12:48 AM 0 comments

In a great clip, the Kyros who starred in Emo Twink and The Twink Whisperer tells us about his love for a hot daddy. All I can say is "Come over here and sit on my lap".

Jonathan Agassi, one of the much-discussed castmates of Lucas Entertainment's blue movie "Men of Israel," has signed an exclusive performance contract with the all-male studio.

"Jonathan is an impressive performer. He has an amazing and passionate sexual energy that comes through in every scene. "This force, combined with his flawless physique, makes him the perfect addition to the line-up of Lucas Entertainment exclusives." said Michael Lucas.

Jonathan says "I must say that my biggest dream is to be known all over the world for what I do best — sex,"
Posted by Paulie at 12:30 AM 0 comments

"Each DVD comes with a pair of 3D glasses in the case," a company publicist said. "We also sell a 'Party Pack Bundle' on our website that allows customers to buy both DVDs together with 10 extra pairs of glasses for one low price."

Athletic Model Guild (AMG) announced the online world premiere of DURO, the latest addition to the studio’s premium hardcore line. The film’s nine-man cast includes seven newcomers alongside two of AMG’s most popular Brazilian models (Bruno Camargo and Marcelo Mastro), in the first feature to debut on the studio’s newly redesigned membership site, AMGBrasil.com. The first scene is already available to members, and subsequent scenes will be updated every two weeks until DURO is released on DVD. Anyone can view the films’ trailers and previews, free of charge, also at AMGBrasil.com.