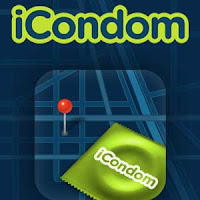 A new app for Apple iPhone will help you find the nearest condoms in two cities New York and Washington DC. It includes bars, restaurants, night clubs and hospitals and has over 140 locations for DC.

Users are invited to suggest locations missed out to ensure that as many are listed as possible.

The application is being offered free in the iTunes store for World AIDS day.
Posted by Paulie at 9:07 PM 0 comments

What is the first thing Republicans wanted to in office? Take care of widespread unemployment, poverty, or the military.

Nope; the thing they're exercised about is a short art video that's part of a new exhibit at the Smithsonian Institution, "Hide/Seek: Difference and Desire in American Portraiture."

"American families have a right to expect better from recipients of taxpayer funds in a tough economy," Boehner's publicity flack Kevin Smith (no relation) told the ultra-conservative CNSNews.com. "While the amount of money involved may be small, it's symbolic of the arrogance Washington routinely applies to thousands of spending decisions involving Americans' hard-earned money at a time when one in every 10 Americans is out of work and our children's future is being threatened by debt. Smithsonian officials should either acknowledge the mistake and correct it, or be prepared to face tough scrutiny beginning in January when the new majority in the House moves to end the job-killing spending spree in Washington."

At issue is a four-minute video segment, "A Fire In My Belly," by David Wojnarowicz, a gay artist who died from AIDS-related illness in 1992. Wojnarowicz made the video as a tribute to his fellow artist and lover, Peter Hujar, who'd died five years earlier.

"[F]or eleven seconds of that meandering, stream-of-consciousness work—the full version is 30 minutes long—a crucifix appears onscreen with ants crawling on it," explained Washington Post art critic Blake Gopnik. "It seems such an inconsequential part of the total video that neither I nor anyone I've spoken to who saw the work remembered it at all."

"Smithsonian Institution spokesperson Linda St. Thomas ... told CNSNews.com, however, that federal funds are not used to pay for Smithsonian exhibits themselves, including the 'Hide/Seek' exhibit, but instead pay for the buildings, the care of collections exhibited at Smithsonian venues, and museum staff, including the salaries for curators of exhibits."

In fact, the exhibit was paid for by contributions from, among others, The Calamus Foundation, The Andy Warhol Foundation for the Visual Arts, The John Burton Harter Charitable Foundation, and The Robert Mapplethorpe Foundation.

But what the hell; the National Portrait Gallery's director, Martin Sullivan, caved to the censors anyway, pulling "A Fire In My Belly" out of the exhibit yesterday.

"I regret that some reports about the exhibit have created an impression that the video is intentionally sacrilegious," Martin said in a written statement on Tuesday. "In fact, the artist's intention was to depict the suffering of an AIDS victim. It was not the museum's intention to offend. We are removing the video today."
Posted by Paulie at 7:33 PM 0 comments

Full version of the Podcast MTFT this week. Get ready for the holidays with Fred Schneider and The Superions with Fruit Cake.

Lucas Trapped in the Game Trailer

Lucas Entertainment has announced the release of "Trapped in the Game," a suspense thriller filmed entirely on location in Berlin, Germany.

“I am extremely proud of this film,” Lucas Entertainment CEO Michael Lucas said.

“'Trapped in the Game' was hugely expensive and time consuming so we went into it with a meticulous plan. Everyone was on their game and I’m incredibly satisfied with the result.”

“We had a tremendously talented cast and crew on this project and they poured their creativity and passion into Trapped in the Game,” cinematographer Pam said.

“We chased though parking garages and down the streets of Berlin, filmed half-naked in the rainy packed plazas, took over a downtown bar, locked Jonathan Agassi in a car on active railroad tracks, commandeered an abandoned factory and in the end the result is truly an amazing Hollywood style action thriller with aggressively hot sex.”

The total running time is 147 minutes and the DVD includes a behind-the-scenes vignette and trailers.


Harry Louis's First Bottoming scene in "Trapped in the Game"