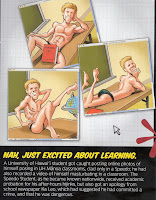 You might remember University of Hawaii's Speedo Student, Tim, who got in trouble for jerking off all over his classrooms and taping it for X-Tube. He has been given buy the Honolulu Magazines 2011 Sour Poi Award, "The best of the worst" for his classroom spunk 101.


Check out the SpeedoBoys Trailer

14 of the hottest men you will ever see, having sex in some of the most beautiful exotic places.. what more could you want.

"It's Summer time on the Costa Brava, where the world's sexist men gather for sun, surf, and some of the hottest man to man sex ever witnessed. Join an international cast of 14 rock hard men on an unforgettable Mediterranean adventure, and find out why Costa Brava means The Wild Coast in Spanish!"

Reese Rideout Teaches You How to be a Stripper

Well maybe not, but a crazy French man that wants $610K from GlaxoSmithKline, the makers of Parkinson's drug Requip is claiming that it made him a Gay Sex and gambling Addict.

The 51-year-old's lawyers say their client's behaviour changed radically after he was first administered the drug in 2003 for the illness, which causes tremors, slows movement and disrupts speech.

Didier Jambart, a married father-of-two who says he has attempted suicide three times, claims he became addicted to Internet gambling, losing the family's savings and stealing to feed his habit.

He also became a compulsive gay sex addict and began exposing himself on the Internet and cross-dressing. His risky sexual encounters led to him being raped, his lawyers said
Posted by Paulie at 4:11 PM 0 comments