I've never really like musicals; I know I'm a horrible gay. After watching this clip from Naked Boys Singing though, I think I might have to give this one a chance.

In a scary reminder that there are evil anti-gay people out there, 11 gay bars in the US have been threatened with a possible ricin-based bio-attack ...

In what's being described as a hate crime, 11 gay bars across the US city of Seattle have been mailed letters threatening of a ricin attack sometime in January, also stating the the aim of killing at least 55 people.

Ricin, a protein toxin that is extracted from the castor bean, was infamously used in the 1978 umbrella-tip assassination of Bulgarian dissident Georgi Markov in London.

The letters sent to the 11 bars and one gay publication, The Stranger, say, "I have in my possession approximately 67 grams of ricin with which I will indiscriminately target at least five of your clients. ... I expect them to die painfully while in hospital."

The letters list the Seattle bars as: The Elite, Neighbours, The Wildrose Bar, The Cuff, Purr, The Seattle Eagle, R Place, Re-bar, C.C.Attle's, Madison Pub and The Crescent.

The letters imply that ricin attacks will take place on a Saturday during January.

Local Seattle police and the FBI are investigating the letters and are evaluating the likelihood of an actual attack.

Elite manager Kay Hansen said the bar was now warning customers to not leave their drinks unattended: "On the one hand you don't want to overreact, but on the other hand, you want to make sure your staff and clients are safe."
Posted by Paulie at 11:37 PM 0 comments

Nine Men Jailed For Eight Years For Being Gay

In Senegal, nine gay men under the age of 30 have been sentenced to eight years in prison for being gay ...


The men, who were all arrested together in December in a suburb of the capital Dakar, had been charged with "indecent conduct and unnatural acts and membership of a criminal organisation."

Joel Nana, of the International Gay and Lesbian Human Rights Commission, said: "We are in shock. This is the first case that I have heard of where someone is sentenced to eight years in jail for homosexuality."

Despite the majority Muslim country deeming homosexual acts punishable by a maximum sentence of five years, the judge bumped the sentences up to eight years after taking into account their "membership of a criminal organisation".

The "criminal organisation" most of the men belonged to is said to be an association set up to fight against HIV/AIDS.

The group was arrested after an anonymous tip-off and the group were arrested "while they were in the act and they had pornographic pictures," a source told the AFP.

The men's lawyers said they would appeal the sentence.

After an HIV/AIDS conference in Dakar in December, an Islamic group slammed as "inappropriate" the participation of gays in the conference.
Posted by Paulie at 11:34 PM 0 comments 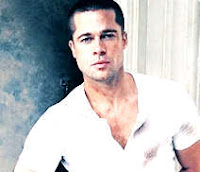 Brad Pitt, who contributed $100,000 to California’s unsuccessful No on Prop 8 campaign, has spoken out about those who seek to suppress gay marriage ...

In a new magazine interview Pitt says, "People who are against gay marriage do not understand the very freedoms that they themselves are enjoying."

"What if someone said, ‘Sorry, no Christianity here? No Judaism. Certainly no Mormons.’ No one would stand for that, and I wouldn’t allow anyone to say that either. I’d fight them in the same way," Pitt told W Magazine.

Pitt and partner Angelina Jolie have previously said they will not wed until marriage rights are available to all.
Posted by Paulie at 11:30 PM 0 comments

CIA Gets “Hard” on Terrorism with Viagra

The CIA is taking a hard line against terrorism - bribing Afghan tribal chiefs with Viagra, it was reported yesterday.

While the spy agency has a long history of buying information with cash, the growing Taliban insurgency has mandated that it rise to the occasion with creative methods to gain support in some of the country's rough neighborhoods, The Washington Post reported.

In one case, the newspaper said, a CIA officer visited an Afghan chieftain who looked older than his 60-odd years and had four younger wives, the maximum allowed by the Koran.

The officer saw an opportunity and reached into his bag for a small gift - four Viagra pills.

"Take one of these. You'll love it," the officer said, according to the newspaper.
The turn-on worked. The officer returned four days later to an enthusiastic reception.

The chief offered up a bonanza of information about Taliban movements and supply routes - and came on strong with a request for more pills.

"He came up to us beaming," the officer said. "He said, 'You are a great man.' "And after that, we could do whatever we wanted in his area."
Posted by Paulie at 11:26 PM 0 comments

Finally something on Youtube other then a Beyonce' Single Ladies parody.

Drag Queen Sherry Vine spoofs Britney's Womanizer video. Not the best voice I've heard, but Britney's might be worse without the magic of professional recording studio. And yes that is Ben Andrews appropriately cast as the 'Supersizer'.
Posted by TR at 4:55 PM 0 comments

After six years of holding the title ‘Falcon Lifetime Exclusive’ Matthew Rush will depart the studio that catapulted him to icon status in the gay adult film industry. Rush signed his first Exclusive contract with Falcon Studios in 2000 and followed with a second one year contract in 2001 before being offered the Lifetime contract in 2002. Rush was named Best-Newcomer during the 2001-2002 award season and since then has been recognized by fans and industry peers as one of the most enduring and recognizable performers working today.

Rush began his eight year career with Falcon by appearing in the now classic films; “Bounce”, “The Other Side of Aspen V”, “Hazed”, “Defined” and “Splash Shots III – To The Hilt”. During his tenure with Falcon Entertainment Rush has appeared in twenty-eight films under the Falcon, Mustang and Jocks lines of films. Rush’s last performance with Falcon was the highly anticipated and controversial Zeb Atlas scene in “Best Men – Part 1” which has gone on to be one of the best selling pre-release web-scenes for the studio to date.

Falcon’s Director of Promotion Troy Prickett comments, “Matthew’s contributions to Falcon are immeasurable, not only has he inspired and mentored many Falcon Exclusives over the years but once his name or image is associated with a film we are assured that project will be a success. Anyone who’s worked with Matthew also knows what a consummate professional he is, filming with him is always smooth sailing. We wish Matthew all the best and much continued success, and even though he will officially be shedding his Lifetime Exclusive title we fully expect to be working with him again sometime soon.”

Perhaps he could put some of that creativity into his blog now. If I read another entry about going about to the bank or grocery shopping, I'm going to throw myself off a bridge.

Something tells my Paulie will have an opinion on this.
Posted by TR at 5:01 PM 2 comments

For the first time, a marching band made up of gay and lesbian members has been invited to participate in a US presidential inaugural parade ...
Gay marching bands from across America have been selected by the Lesbian and Gay Band Association to march in the inauguration parade of Barack Obama on January 20.

"I am honoured to invite these talented groups and individuals to participate in the Inaugural Parade," Obama said in a press release. "These organisations embody the best of our nation's history, diversity, and commitment to service. Vice President-elect Biden and I are proud to have them join us in the parade."

The 177-piece gay band will be joined by dozens of other bands from across the United States in the parade down Washington's Pennsylvania Avenue, which will take place after Obama's swearing-in at the Capitol.

Obama has recently been criticized by gay and lesbian advocates for his choice of pastor Rick Warren to deliver the inaugural invocation. Warren is an outspoken opponent of gay marriage.
Posted by Paulie at 12:27 PM 0 comments

The second member of the British Conservative shadow cabinet to enter into a same-sex partnership did so last week, it was revealed at the weekend ...
Nick Herbert, the shadow justice secretary, tied the knot with his partner Jason Eades in a south London town hall - with opposition leader David Cameron sending a message of support to his shadow secretary.

Herbert's union has received the blessing of not only his leader and gay rights groups, but also of his constituency association - perhaps the most important support of all.

The latest political gay union puts the Conservative to Labour score at 2-0, with none of PM Gordon Brown's cabinet having yet taken the plunge.
Posted by Paulie at 12:24 PM 0 comments