My favorite is the "Soap Dropper" super hero without a doubt that would be my super power. 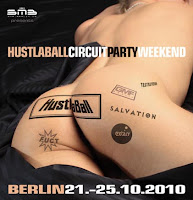 HustlaBall Berlin, scheduled to take place Oct. 21-25, has lined up a slate of top-shelf adult and musical talent to delight attendees during the weekend-long event.

A number of sought-after European DJ’s also have been contracted to perform during the weekend.

“For our parties the best are just what we need,” Müller-Bardone said. “This goes especially for our jubilee, so once more we booked the best European DJs. Never before so many top DJs were in Berlin for a Cicuit Party weekend.”

A weekend pass costs 71 euros for regular admission or 151 euros for VIP admission. The passes include Thursday’s opening reception at Hotel Axel and the after-party “Testosteron”: Friday’s HustlaBall Awards show and the HustlaBall itself; Saturday’s HustlaBall after-hours party and the parties FUCT and Salvation; Sunday’s Extasy and Monday’s GMF.
Posted by Paulie at 6:45 PM 0 comments

Visconti brothers, are 19 year old Budapest born identical Triplets with 8.5 inch cocks , I would have loved to clean up after this Fleshlight Fun.

Titan Media, has filed a federal lawsuit seeking damages from and an injunction against 244 anonymous defendants the company accuses of content piracy and civil conspiracy. The action, filed Aug. 19 in the U.S. District Court for the Northern District of California, alleges “[d]efendants reproduced, distributed and publicly displayed, through the [peer-to-peer] network ‘eDonkey2000,’ certain Io Group-owned audiovisual works.”

What is new and notable about Titan’s Aug. 19 filing is the allegation of civil conspiracy. Titan seeks to enhance the potential damage award and give the court additional grounds for enjoining the defendants’ future behavior and ordering confiscation of the spoils by tying all the Does together as a conspiring mob.

The list of pirated titles reads like Titan’s catalog, making remarkably clear the potentially devastating financial losses suffered by adult entertainment companies as a consequence of unauthorized content copying and sharing. The suit lists 91 titles—many award-winning or -nominated—Titan investigators discovered available in full on eDonkey2000 during April and May 2010:

According to the lawsuit, most of the titles were shared more than once, meaning if Titan is successful in gaining a judgment against each defendant, damages could top $14 million, exclusive of court costs and attorney fees.
Posted by Paulie at 10:41 PM 0 comments

What makes this ad from Coca-Cola in Egypt so funny is that being gay is still a criminal act.

3 part interview with David Yost, the Blue Power Ranger taking about the harassment he would get on the set of Mighty Morphin' Power Ranger Set for being Gay.

My favorite part is how easy it is to catch a D.C. Bear because "They Don't Run".

Have you ever been hit with a paintball... IT HURTS LIKE HELL and that's with lots of cloths on. When I play, I look that the Stay Puff Marsmellow Man.

Spencer tells TMZ he feels Heidi wants to divorce him because she thinks he's bad for her image. But, as we first reported, Spencer has eyes on doing another reality show with Heidi, saying, "We're reality stars, not serious actors. She can’t think she’s Naomi Watts. She’s a tad delusional."
Posted by Paulie at 1:10 AM 0 comments

From 8teenboy Swimtwinks - They've just won big and now these Swimtwinks are ready to celebrate the best way they know how - sex! With two threeways and six scenes of twinks in swimwear, your Speedo fetish will be quenched.

Wedding expo caters to MD gay couples planning to marry in D.C. with over 3 dozen companies for gays eyeing a wedding in Washington DC.

"There are lots of businesses that want to tap into the gay marriage market and don't know how," said Deborah Cummings-Thomas, who co-owns Marry Me in DC, a consortium of wedding officiates. "It's a huge economic market. You have people with lots of disposable income, love to travel and love to have a good party."

Washington began sanctioning gay marriage in March. While same-sex marriage is illegal in Maryland, Attorney General Douglas F. Gansler issued an opinion in February holding that Maryland should recognize same-sex nuptials performed out-of-state. The opinion has a direct impact only on state agencies but has been hailed by gay-rights advocates as a step toward equality.

"We're sort of in that gray space," lawyer Heather McCabe told expo attendees at a session on legal matters. McCabe said that the issue in Maryland will ultimately be decided in court and that same-sex couples should sign wills, prenuptial agreements and other legal documents.

The expo cost $5 per person. Less than halfway through the afternoon, all 100 pink gift bags were gone. For Drew Vanlandingham, a wedding planner, the prospects seemed promising. "The people who are coming today are serious," he said. "They're not playing around."
Posted by Paulie at 12:42 AM 0 comments