Falcon Studios has signed Micah Brandt to be an exclusive model for one year. A rising star, Micah is featured in an exclusive update that premiered today on FalconStudios.com. Bringing an ethnic flavor to Falcon, his signing is part of an effort by company president Chris Ward to diversify casting at the legendary studio.

"Micah is stunningly beautiful," commented Ward," and to me, he represents our kind of stud—a wonderful face, a near perfect body and an attitude that is both friendly and sexually charged. We hope to have a long relationship with Micah. He is an excellent performer and we are proud to have him represent the studio."

"I'm looking forward to working for the highly professional team at Falcon," said Brandt. "To be an exclusive for the biggest studio in the world with the best directors and production team is a privilege."

Micah is scheduled to shoot for both the Falcon and the JOCKS lines, and he will be featured on HardFriction.com. He recently shot a scene with Raging Stallion/Falcon exclusive D.O. for the upcoming release Fahrenheit, which is scheduled to premiere this February.

Check him out for getting busy for Randyblue

Compliments of RocketTube
Posted by Paulie at 6:57 PM 0 comments

Mi smo dio ekipe! We are part of the team!

The aim of the project "It's OK to be different", which part is this video clip, is to contribute to the development of the culture of human rights and sustainable democratic society through the series of activities, with the focus on strengthening of social capacities in promotion of LGBT rights and anti discrimination policies.

American Idol Adam Lambert got into a bitch slap fight with boyfriend from Big Brother Sauli Koskinen, was arrested and jailed Wednesday night. Finnish papers saying that Lambert and Koskinen began arguing in a Helsinki bar and eventually took the fight out into the street. Lambert reportedly got physical with people who tried to break up the fight. Police apprehended both Lambert and Koskinen and took them into custody, where they were questioned and released.

You know it must have been a bad slapping fight with manliner getting smeared all over, the the story gets even better. There was not just 2 queens involved but another queen... an actual Beauty Queen got whacked. During the altercation, Lambert whacked a former Miss Helsinki, THR said. Sofia Ruusila, who'd been out celebrating with the boys, told a local entertainment channel she was accidentally hit by the singer when she tried to get between the two as they fought.

Entertainment Weekly translated a note that Koskinen posted on his blog in Finnish, saying, “The limelight is not easy. But celebrities are only human people. Love is not easy but it is forever! ...[E]verything is really good! ... Hey, the evening was pretty funny and the hangover is already gone! Yay!"

Best Real Estate Ad You Will Ever See

Good news for all the Cody Cummings fans, he has renewed his exclusive contract with Next Door Entertainment.

"I always have the time of my life at work," Cummings said. "I mean, what could you dislike about sex, laughs, and good times? It's also a lot of work as well, so I am happy to continue working with the Next Door Team."

"We are so pleased with the re-signing of Cody," said Stephen Sirard, president of Next Door Entertainment. "He is a key figure in the Next Door family of content and one of our brightest stars."


Compliments of RocketTube
Posted by Paulie at 6:33 PM 0 comments

Bel Ami has paired up the famous Peter Twins with one of their most popular star Kris Evans for one of the hottest 3 Ways you will ever see. Check it out below. 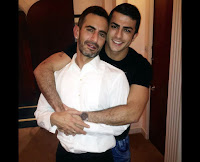 Compliments of RocketTube
Posted by Paulie at 8:00 PM 0 comments

Jessy Ares is not only is he one sexy fucker, good singer. Check him out getting naked for his single "Striptease"

Check him out fucking Alessio Romero in Titanmen's "Consent"

Compliments of RocketTube
Posted by Paulie at 7:45 PM 0 comments

A new Manhunt steamy Billboard is "erected", just in time to slide down a strangers North Poll, (right next to "Godspell") this week in Time Square. Promoting it's new mobile service, that is a Grindr like app that will let you hook up with the guy right next to you "Zero feet away".

This is the same billboard that had a crazy mother in LA panties in a twist because she did not want her kid to see their are gay people in the world.
Posted by Paulie at 7:33 PM 0 comments

He will come to your Fat American house and make you watch while he eats your butter from you fridge. Cant he use some of the lip gloss for his cake? 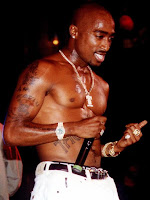 A sex tape that surfaced in October featuring late rapper Tupan Shakur now belongs to a private collector who has no plans of releasing it, according to TMZ.

Dark Alley's A Monster Inside Me Preview

Watch it now on Adonis Video On Demand - Click Here 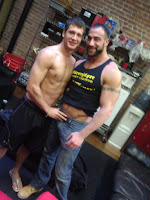 After Spencer Fox's meltdown on Twitter where he says "I Feel so Free! No more dealing with any of these fucking faggots in the GAY porn industry" "To the Gays: I am a heterosexual man. I was born a heterosexual man, and I will die a heterosexual man. I”m attracted to women. GET OVER IT YOU FAGGOTS!!! I respect your homosexuality, so respect mine you father fuckers! I had sex with men on camera because it pays more than having sex with woman. That is the only reason why!!!!!!! Money is the only reason why i sold my body on camera, and if you think it was for any other reason, then you are fucking restarted!!!!!!!!!!!

You think its appropriate to parade unicorns and rainbows and phallus shaped objects after your hit the age of 18 and become a man? GROW THE FUCK UP!


Spencer is back getting fucked by Erik Rhodes with Raging Stallion... WHY?

Mini DVD Review Falcon Studios "Indiscretion" with Jesse Santana on cover bending over 95 mins 4 Scenes 3.5 Splats - A story about peoples little or in this case very big "Indiscretion". Following Falcon tried and true format with huge cocked handsome guys, nice tans and muscles and good sex this DVD get a slightly better than average 3.5 splats with a very hot 3 ways with "whorey" Jesse Santana in a bar with Colby Keller, Dylan Roberts. Jesse is in the middle of a man meat sandwich that every boy will want a bite of. Best line of the Movie is in the end, when boyfriends Dakota Rivers and Jesse Santana have make up sex after fucking guys all around town and Jesse Says "Maybe I shouldn't Fuck Around on You So Much"! How Romantic :)
http://www.blogger.com/img/blank.gif

Watch it Now with Adonis Video On Demand

Compliments of RocketTube
Posted by Paulie at 3:20 PM 0 comments

It has happened to all of us, a hot guy with huge junk in his shorts and you can't stop staring

Slap the Manliness back into You

This is the opposite of a "Bitch Slap"

The boys bring you a pre Holiday Podcast with wishes of stuffing tight twinks ass and wet sloppy blow jobs in their heads. They answer you question about being a paid fluffer for porn (you will have to stand in line behind Paulie for that job) and review the new Falcon DVD Indiscretion with Jesse Santana and give it 3.5 splats. David reviews the new Fleshlight from Bel Ami Boy Dolph Lambert's Ass and loved how real it felt. They also discuss the new Ab Fab -vs the Kardashians, Rick Perry has a small cock and is the worst fuck EVER and the new sitcom "Work It" offending GLAAD (not to mention anyone who watches it.) They love your letters and comments from the Blog and as always wish you ... Stay Hard! 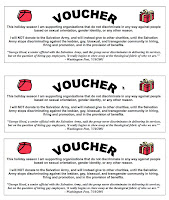 A number of years ago, several people created "vouchers" that you could download and give to the Salvation Army at Christmas instead of dropping cash in their buckets outside all the stores. The vouchers are a good way to let the Salvation Army know that bigotry is not a Christmas value.
Posted by Paulie at 3:43 PM 0 comments

Hot Safe Sex from Israel "Going All the Way"