I guess if you can’t be Miss America why not be Miss Ignorant Bigot. Despite saying she wouldn't, anti-gay marriage Miss California has allowed herself to be recruited to the fight against marriage equality for all

It's being reported that Carrie Prejean has now officially joined the movement the National Organisation for Marriage (the ones who did the unintentionally hilarious 'storm is gathering' ad) despite saying she wouldn't in a TV news interview.

Prejean is headed for Washington DC to help unveil a new ad by the group that focuses on her experience answering that question at the Miss USA pageant, and the backlash that followed - the ad is said to make her out to be a bit of a martyr.

I wonder if her new crown as Miss Ignorant Bigot is made from Bull Shit.
Posted by Paulie at 10:07 PM 1 comments

Hate filled US Republican representative Virginia Fox states that Matthew Sheppard was killed in the commitment of a robbery not because he was gay. She must also think the Holocaust never happened, lets hope that no one in her family dies like Matthew did.

From The Human Rights Campaign - We just got the news: the U.S. House has passed the fully inclusive Matthew Shepard Act.

This was not an easy victory. But we WON in the House – thanks in part to the tireless, fearless Judy Shepard, who joined me in critical last-minute meetings on Capitol Hill today. Now the battle moves to the Senate.

We need every Senator to know we want quick action on the inclusive hate crimes bill. You've emailed, you've called, you've donated – and I thank you deeply – but I hope you understand that this fight is far from over.

President Obama has pledged to sign the bill, but to get it to his desk we'll need to pass it through the Senate first. And with the lies from right-wing groups ALREADY intensifying – one group went so far as to say the bill makes "pedophiles a protected class" and is "pro-child molester" – it's not going to be easy.
The scare tactics continue. Anti-LGBT groups sent lawmakers a note linking to a poster of Jesus that says "WANTED For Violation of the Proposed Hate Crimes Law In His Teachings."

Our only defense is the truth: in the ten years since Matthew Shepard's death, tens of thousands more people have been violently attacked for being who they are. It took ten years of lobbying and educating to get to this point – our long wait for hate crimes protections must end now.

Ten friends of yours can help. Send the video to ten friends now! 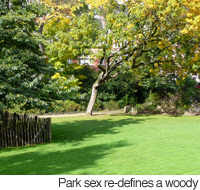 A park near now has information signs pointing out spots where officials say gay men are known to have sex - so no visitors are taken by surprise ...

The signs "clearly indicate what is happening in each zone; also those where gay men are known to practice 'cruising'," municipal spokeswoman Manon Koffijberg said. "There are various groups of users of the park; people with small children who bathe on the beaches, those who walk their dogs, gays cruising and nature lovers,"

"Things are arranged so that each group can relax in their own area without intruding on each other."

They also topline the studio's forthcoming “MuscleHeads,” which focuses on the popular, if specialized, fetish of bodybuilders in form-fitting suits and ties and will be released in May.

"These men are suited up and ready for a hard day at the office — and hard work always has its rewards," the company said. "Whether it's coming home for an afternoon romp or a hot encounter on your lunch break, these men always come dressed for success."

At an anti gay protest, the former mayor has the nerve to call someone “moral heathen” after he robbed the people of DC by Embezzling, smoking crack on camera, and the latest Tax Fraud. What a great leader of “Morality”

Israel Army Music video “What What in the Butt”

Simon Rex aka Dirt Nasty who started his career with some jerk off videos for club 1821 “Hot Sessions 12” was spotted in West Hollywood over the weekend with Lance Bass. It seems they were filming some sort of TV pilot together. From the pics not sure what kind of show it would be, but hope the get naked together.
Posted by Paulie at 6:27 PM 0 comments

Viagra Rival Can Be Rubbed on Skin

Just don’t mix it up with your “JO” lotion by your bed or you will have a “hard night”.

Scientists at Albert Einstein College of Medicine in have successfully tested the new technique of erection helper with involves tiny objects called nanoparticles. Researchers belive that the nanopartice therapy could work much more quickly than Viagra, which takes up to an hour to kick in.

Right now the new erection crème has only been tested on rats so it will be a while before it hits the shelfs.

He shot the role earlier this month on location in Montreal. "I was so terrified I was going to be bad and make mistakes," he said. "But after the first five minutes, everything was OK. I didn't fuck up."

He was given his choice of two small roles: a police officer or a drug addict. He chose the latter as it sounded more interesting.

In the scene set in a hospital emergency room, he and an actress playing his girlfriend demand a methadone fix. "We become verbally abusive to a nurse," Sagat recalled. "There was lots and lots of crew around and the set was huge. No one knew who I was; I loved it. I really hope I get to do another movie."

Sagat is currently onscreen in "Funhouse" and "Overdrive" for Titan Media
Posted by Paulie at 6:02 PM 0 comments