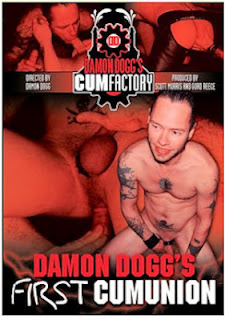 Make sure to check out Damon's new DVD "Damon Dogg's First Cumunion" no top turned away.

This week the boys are getting geared up to see Magic Mike by stripping and dancing on Chat roulette, but in between the shows they talk about Cher's  and Cyndi Lauper's new Broadway musicals, there will so many queens to see them, you will think your at Buckingham Palace. The also discuss how to stay vegan and still eat cum and a new disgusting fetish they have learned about "Blumpkin". Paulie review the new Falcon Jocks Studio Cabin Fever and thinks you will get all hot over this 3.5 spat DVD. David loves the Adam's Pleasureskin Cock Dark, you know the dark meat is always the tastiest. They answer your questions and comments this week and hope you... Stay Hard.

Dark Alley new DVD Machismo (machismo) noun 1. A strong sense of masculinity stressing attributes such as physical courage, virility, domination, and aggressiveness. This DVD has over 90 minutes of non stop action, and is sure to delight not only fans of Matthias', but also admirers of hung, uncut, latin macho-tops... and who doesn't like that?

Nasty Dick shot his best friend in the face with a buck shot riffle, drunk, then fled the scene. This all happened as the Vice President of this country. So I am never shocked about Dick and his Republicans hypocrisy.
Posted by Paulie at 3:59 PM 0 comments

Go Fuck Yourself... and he did


I LOVE TO SUCK MY COCK AND FUCK MY MANPUSSY brought to you by Tube8
Posted by Paulie at 3:55 PM 0 comments

Dan Savage tweeted after the GOProud endorsement of Gay Hating Mitt Romney "The GOP's house faggots grab their ankles right on cue. Pathetic" and Taiwan's Next Media Animation explains it all in Cartoon.

A news report about the possible discovery of a rare mushroom has gone viral after viewers notified the reporter and new agency that the object was in fact a masturbator.

“The report opens with Ye proclaiming the discovery of the mysterious object, the likes of which ‘not even an 80-year-old local man has seen,’” ABC News wrote. “Villagers crouch around the object, floating innocently in a water-filled bucket. ‘It has an eye and a nose, but we don't know what it is!’ says a man who was among the drillers who discovered the sex toy.”

Ye goes into great detail describing the object, noting “this looks like a type of fungus, on both ends of which you’ll find mushroom heads.

“On this side, you can see what looks like a pair of lips,” she continues, according to various reports. “And on that side, there is a tiny hole which extends all the way back to this side.”