The Leather/ Levi’s bar “The Faultline Bar” in L.A will host it’s annual Pornathon Lot Party Aug.17th. Proceeds from the event will be used to support the work of the National Gay and Lesbian Task Force fight to defeat California’s Prop 8 that would ban same sex marriages.

"I am the first to admit a queasy cynicism at the idea of the ‘normalizing' of gay culture, which ‘marriage' in general represents to many," said Faultline owner Shawn Farnsworth. "But even though I do not see marriage, per se, as a defining life pattern for myself, I have come to recognize that it nonetheless embodies an acknowledgment of our fundamental equality and civil rights as gay people in a way that no other legal or social institution could possibly offer. Marriage is a fundamental social cornerstone that even the religious right cannot deny. The very fact that they hate the idea of gay marriage so much indicates its power as an institution to challenge the status quo and change minds - even our own, about ourselves."

Companies that have signed up to support the event include Titan Media, whose exclusive Tony Buff will headline the event. Titan also has donated multiple sets of the Folsom series DVDs and its entire collection of Blu-ray Disc films for the auction. During Pornathon, Buff will autograph copies of the new 2009 TitanMen calendar, in which he is Mr. January."Shawn and his team at the Faultline have always been at the forefront of giving back to the community," said Titan Media vice president Keith Webb. "We are proud to be a part of such a worthwhile event. Marriage equality is a civil rights issue and one we wholeheartedly support. In fact, our general counsel, Gill Sperlein, will marry his partner Carlos in October, so this has very personal meaning for us all.

Mattel short lived Earring Magic Ken doll with his lavender faux leather vest and mesh T-Shirt, blond frosted hair and most important a Cock Ring around his neck turns 16 this month. This Ken doll is the best selling to date, but once Mattel figured it was grown gay men buying and not little girls, they pulled Ken from the shelf. Watch out G.I. Joe, he is almost legal age and looking to get laid.

"We feel that it is essential to honor these individuals and companies as being technological entrepreneurs, important agents of free expression and cultural change, and innovators in queer online media and entertainment," said Morgan Sommer, co-publisher of Cybersocket, the LGBT magazine that founded the awards.

Nominations will continue through Oct. 5 make sure to vote for GayPornTalk for Adult Blog and Adonis Enterprises for Adult Novelties Site and I will give a blow job for each nomination :)~.
Posted by Paulie at 12:16 AM 0 comments

Mr. T Pities The Fools Who Think He Isn't Gay-Friendly

Mr. T is on the defensive on “The O’Reilly Factor” after appearing the now infamous Homophobic Snickers ad. Mr. T doesn't seem to understand why shooting someone that has a gay swish is offensive. 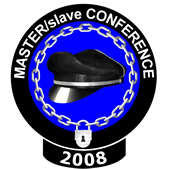 We all know where “Toe Tappin Larry Craig” is going to be this weekend, in the bathroom stall at Master and Slave here in DC this weekend. It is the largest gathering of masters and slaves on the East Coast and the only educational event on the master/slave relationships of its kind.

The event will feature more than 40 workshops on the dom/sub relationship, the Northeast Master/Slave Contest and a vendor market. 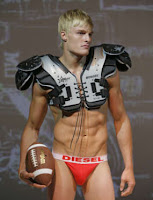 Even though I usually go commando, but I think National Underwear Day should be a federal holiday if I could see some of these hot hunks walking around. This year is the 6th anniversary of National Underwear Day and what was previously held on the streets of Time Square, is moving indoors to the glamorous venue Espace in New York . Model Tyson Beckford will also be making a special appearance.

Now go outside and celebrate the day and take off your pants!

Police arrested Schramm during an art opening Friday night at his 2501 Gallery on Central Avenue. He was charged with battery of a law enforcement officer and unlawful exposure of private parts, a violation of a city ordinance that prohibits the display of genitals where alcohol is served.

Schramm said he merely tried to show a police officer how to push the door open. Police said Schramm touched the officer's arm and tried to prevent him from entering.

Police found nude model Joshua Culotta sitting in a swing hanging from the ceiling. It was the second time that night police visited the gallery. An officer first complained about an 8-foot-tall penis outside near the entrance. Schramm said it was art and refused to move it.

Cole Ryder Loved by all and will be Missed

I came home for vacation to learn the bad news of Superstud Cole Ryder’s untimely death. Ryder died Wednesday at the very early age of 35, details are sketchy at this point, former Rascal Exclusive Cole Ryder died of a staph infection in his sleep Update: Cause of death remains unknown, is pending results of an autopsy.

Formerly a flight attendant and personal trainer, Ryder was discovered by C1R director Doug Jeffries at a gym in Los Angeles. Immediately overcome by Ryder's masculine good looks, toned body and megawatt smile, Jeffries introduced him to LaRue, who cast him in a scene opposite Johnny Hazzard in Leather Sessions. The movie was Ryder's first gay-porn experience.

Bang, who cast Ryder in two films and had planned to cast him in many more under a special arrangement with Rascal, also praised Ryder's professionalism."I have never worked with anyone who was that professional and ready to do whatever it took to get the best possible scene," he said. "He had a unique deep-and-warm masculine voice. I remember him coming in to the set of In the Zone on the day when he was only scheduled to do his stills and offering to do a cum-shot as we were shooting background sex club footage. We were doing this with a moving camera and 12 models in the shot. He timed his cum-shot perfectly to happen as the camera came to him. This was with no preparation at all."

For all his maturity on-set, though, Ryder remained a kid at heart, according to Jeffries, who maintained not only a professional relationship with Ryder but also a close personal one."He loved Disneyland and Universal Studios," Jeffries said. "His favorite time was Halloween at [those two places]. He was just a big teddy bear of a guy."Added C1R director of public relations Andrew Moore, "Cole was such a genuine person with an amazing heart. He made a lasting impression on me and I will never forget all the times we shared. He will be greatly missed, and although I only knew him a short time, I feel honored that I was able to know him at all. Cole's legacy will forever live on in his works and the hearts of his friends, family and fans."
Posted by Paulie at 11:20 PM 0 comments