A family friend says Eartha Kitt, a sultry singer, dancer and actress who rose from South Carolina cotton fields to become an international symbol of elegance and sensuality, has died. She was 81.

Kitt, a self-proclaimed "sex kitten" famous for her catlike purr, was one of America's most versatile performers and Catwoman for the Batman Series, winning two Emmys and getting a third nomination. She also was nominated for two Tony Awards and a Grammy.
Posted by Paulie at 5:42 PM 0 comments 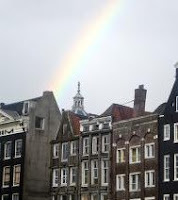 Amsterdam hosted a Christmas celebration for its gay community on Sunday featuring a nativity tableau with a male Mary in drag that church organizations denounced as an affront to traditional values.

Organizers said the event was meant to raise Amsterdam's profile as a gay capital at a time when homosexuals feel threatened.

Christians for Truth, an independent religious group, had asked the city council to cancel the "Pink Christmas," event, saying it made a mockery of Christian tenets. The city did not comment.

A male entertainer known as Wendy Mills posed as Mary in a blonde wig and high-heeled black boots and holding a plastic doll. Another man played Joseph in black leather trunks and a silver shawl.

The five-person manger scene was staged off the street, in the courtyard of a nightclub. Visitors were invited to be photographed with the group. The first was 3-month-old Lily Pink Albers, Mills' niece.

"By portraying Joseph and Mary as homosexuals, a twisted human fantasy is being added to the history of the Bible," Christians for Truth said in a statement ahead of the event.

A few dozen visitors wandered through the 100-yard (meter) long Pink Market past stalls selling leather goods and Christmas cards with gay themes on a downtown street known for its gay nightlife and popular restaurants.

Frank van Dalen, chairman of Pro Gay, which organized the event, said gays were not satisfied with being tolerated, but wanted to be "socially accepted as an indivisible part of society."

He said the Amsterdam city council sponsored the euro15,000 ($21,000) event, which he hoped would become a regular event, like the annual floating summertime gay pride parade through the city's canals that attracts tens of thousands of visitors.

"Our objective is not to be offensive. This is about visibility," he said.

Van Dalen pointed to a report last month that said homophobia was an ingrained problem in Amsterdam, despite the city's freewheeling reputation.

The study by the University of Amsterdam reported 67 violent attacks against gays in 2007, which police said was about average.

Van Dalen said gays were feeling increasingly uncomfortable in public in recent years, and that they perceived Dutch society as more assertive about "classical values."

27,000 letters urge LDS leader to back rights of gay Utahns. President Thomas S. Monson: You have mail - boxes of it.

The Human Rights Campaign (HRC) delivered 27,000 letters to LDS Church headquarters Monday - all of them asking the Mormon leader to support legal protections for gay and transgender Utahns.

The national gay-rights group has endorsed Equality Utah's Common Ground Initiative, a collection of bills that would, among other things, provide rights to fair housing and employment for lesbian, gay, bisexual and transgender (LGBT) Utahns and domestic-partner benefits for same-sex couples.

The movement was born in response to statements the LDS Church made in the wake of California's Proposition 8 - which eliminated gay marriage in the Golden State - that the church "does not object to rights for same-sex couples regarding hospitalization and medical care, fair housing and employment rights or probate rights."

WordPerfect co-founder and Orem resident Bruce Bastian, who is gay and sits on the HRC's board, launched the letter-writing campaign last week by sending an action alert to HRC members.

"Our movement has a long history of respectfully engaging with those who would deny our basic humanity and civil rights," Bastian wrote in his e-mail. "Let's hope the church's claims are more than just a political posture."
Posted by Paulie at 5:33 PM 0 comments