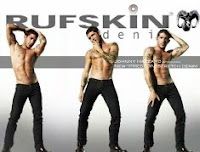 
After two years of butt beating internet fame, Herrington was invited to come to Japan a couple of weeks ago to appear on a talk show.

and the best urinal award goes to....

His exclusive CockyBoys contract applies solely to the gay side of the adult business. Hudson also will film straight content for Kink.com, another online studio.

Hudson's initial work with CockyBoys included a duo with Jesse Santana, one of the first prominent performers to abandon DVDs for a web-exclusive contract.

"They are easy to work with, and that speaks volumes," Hudson said. "I think this new partnership with CockyBoys will be exciting in that I will expand my horizons and try some cutting-edge stuff with the company. I look forward to seeing what happens for both the straight and gay side, with me smack-dab in the middle."
Posted by Paulie at 3:14 PM 0 comments

Perhaps known as the "worst hit man in the world" Edmon Vardanyan gets sentenced to 20 years in prison. Vardanyan was paid 5,000 bucks to carry out three attacks on an elderly couple by the couples son-in-law. The Elderly couple suffered fractured skulls and other injuries as a result of the attacks.

Prior to receiving his sentence, Vardanyan was questioned by Judge Kovachevich. She asked if he really needed "such a small amount of money." He told her that he did.

"You could have walked away and said no, and then you did it a third time," she admonished him. Mrs. Komissarchuk "could have been your own mother."

Vardanyan replied, "I was trying to prove something, I guess."

The Komissarchuk’s son-in-law, Alex Shevgert, is expected to receive his sentence next month. Another man, Larik Cholak, has been sentenced to three-and-a-half years in prison, followed by three years of supervised release, for having recruited Vardanyan to commit the attacks.

Vardanyan, an Armenian native, will be deported once his sentence has been served, his attorney said. He has anchored such titles as "Latinolicious," "Just Add Water" and "Code Violators" for Jet Set Productions, "Big Dick Club 2" for Falcon Studios, and "Communion" for Hot House Entertainment.
Posted by Paulie at 3:06 PM 0 comments

At the very young age of 24, Caleb Carter has died by hanging himself in his apartment in San Diego. Carter additionally was manic-depressive, and had been struggling with alcohol addiction. He had apparently stopped answering his cell phone for several days; performer Brent Summers drove over to Carter's apartment and discovered the body.

A wake that was organized by several friends and relatives was held Monday night in San Diego. A memorial service and cremation burial is scheduled for today.

In 2006, Carter achieved a bit of pop-culture notoriety during a same-sex episode of the MTV reality-dating series "Parental Control." His bitchy one-liners generated a strong viewer response, and led MTV producers to cast him in an episode of their reality-documentary series, "True Life" titled, "I Am Gay" in which his parents also appear.
Posted by Paulie at 2:57 PM 0 comments