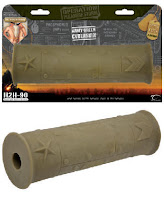 My favorite is the CyberSkin Knob Polisher Masturbator that looks like a hand grenade that sure does lead up to a big blow. The also have the original Cockfight Double Stroker Masturbator that is made for two guys at one time that is really fun and feel great when you both climax. Make sure to check out the whole line of toys that will get your member standing at attention.

Your Wii turned Into a Sex Machine

If you are getting tired of fishing or bowling with your Wii remote then get ready for some new excitement.

The Mojowijo comes in varieties for men and women, and the piece simply attaches to the accessory port on a Wii remote control, which is then connected to a Bluetooth-enabled PC running Mojowijo software. The device’s patent-pending Motion2Vibration technology lets the motions of the control be translated into vibration signals that are sent to another device, either in the same room or over the internet.

The company notes that the Wii console is not required for the process. Mojowjo is in the final stages of development and will enter beta testing soon.
Posted by Paulie at 9:33 PM 0 comments

“I am happy to support this year’s GMFA/RVT Gay Sports Day,” Cohen said in a statement the day before the event. “Sport is an important part of my life, and it’s great to see a community come together and enjoy sport in such a fun and accessible way. Plus it raises vital funds for the important work carried out by GMFA and the other charities which will benefit from the day.”

I bet if he sold used one would have doubled... Yummy!
Posted by Paulie at 9:10 PM 0 comments

Colt Fresh off the Vine Trailer

Check out The Hot Men of Baltimore Comic Con 10

Ok... so only some of them were hot, but they all have to have big balls to walk around downtown Baltimore in some of these costumes. Check out the set of photos.
Posted by Paulie at 4:46 PM 0 comments

SF Weekly List of Top 10 Closeted Conservatives of All Time 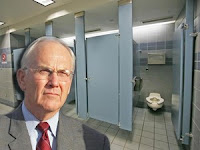 10) California state Sen. Roy Ashburn. - Ashburn how was outed after a drunk driving from a Sacramento Gay Bar with a trick.

9) Former Idaho Sen. Larry Craig.- Known as Toe Tapping Larry, for his soliciting a cop from an airport bathroom.

8) The Rev. Ted Haggard. - Not only was he found with Crystal Meth but in a relationship with a male massage therapist for 3 years.

7) George Rekers. The self proclaimed expert on homosexuality, and he was because he hires male escorts.

4) Gov. Jim McGreevey.The former Democratic governor of New Jersey was married... twice but had a sex affair with a man on the state's payroll, who he hired.

3) Roy Cohn. - The self hating gay who was responsible for McCarthism in the 50’s that persecuted thousands of being communist and homosexual and who died of AIDS in 1986

2) J. Edgar Hoover.- The longest-serving head of the FBI had a lifelong relationship with an associate director of the FBI named Clyde Tolson.

1) They are saving this spot for the next hypocritical conservative. Who do you think Brian Brown from the N.O.M., or maybe United States Senator Lindsey Graham, South Carolina?
Posted by Paulie at 4:34 PM 0 comments

Gruber has been photographed with Klein at multiple events this summer, with The Huffington Post referring to him as Klein’s boyfriend and the New York Post’s Page Six taking it one step further, calling Gruber his partner.

You go C.K., but I bet I know something that gets between Gruber and his Calvins.
Posted by Paulie at 4:13 PM 0 comments

I love Squirt.org description of this "Resort" "Be prepared to see everything and to be touched as you walk around. Outdoor pool. Watch guys having sex in their rooms, while you stand on your balcony."

This motel and entertainment resort beats at the heart of 's gay nightlife. There are 130 rooms with cable TV and phones, a big pool, disco, a lakefront beach, and a cluster of six bars, stores, and a restaurant. Everything stays open till Among the many attractions here are: drag and cabaret shows from the Footlight Players, a rotation of the area's hottest male dancers, headliner guest performers, Latin nights, pool parties, and happy-hour buffets.

"Houston-based Southwest Guaranty Ltd. and Compass Bank of initiated foreclosure actions against the property on North Orange Blossom Trail in July over a $7.5 million mortgage that matured at the end of 2009. Attorneys for the creditors said Monday they expect it will taken over this week by a court-appointed receiver, which would continue the club's operations under court orders. Entrepreneur Donald Granastein and his wife purchased it in 1999 and have operated it since then. The couple have been credited with renovating and reinvigorating the somewhat-faded 60 Y.O. landmark on the western edge of downtown. Granastein said Monday he didn't have the money to repay the note when it came due. He added that he holds the liquor license and expects to continue operating it, even under a receiver. "Am I happy with this? That's a big no," he said. "But I'm stuck with whatever happens, and we will be open 100 percent."

Check out just one of the many Amateur Sex Tapes Recorded from the Parliament House.

GAYVN Personality of the Year Nominees Prepare to Do Battle

Chi Chi LaRue, Sister Roma and Jason Sechrest will vie for the first-ever Personality of the Year award during the 12th annual GAYVN Awards celebration. During the gala evening, the three seasoned entertainers will stamp the proceedings with their own personal touches, doubtless giving new dimension to the term “spectacle.”

“I think fans should vote for me [for Personality of the Year] because I’m everywhere!” she exclaimed. “I am the party. And I want everyone everywhere to have fun. I’ve spent my entire career helping people get off and get down in the bedroom and on the dance floor.”

Like LaRue, Roma is everywhere. Whether hosting red-carpet events at awards shows or frazzling straight-man Tim Valenti on their web-based talk show, The Tim and Roma Show, “the world’s most photographed nun” is a one-queen tour de farce. She also serves as the art director for Hot House Entertainment.

“A clown…a clown that is a nun…and me,” he said of the Personality of the Year nominees, tongue firmly in cheek. “I don’t think this should really be a very difficult choice. Clowns are scary. Clowns are evil. I don’t know if you ever saw the movie Stephen King’s IT, but I’m gonna be honest: It made me pee my pants a little when I was a child. Chi Chi LaRue and Sister Roma still make me pee my pants today. And then they lick it up. Sick, twisted, child-eating, pee-loving clowns.

The Personality of the Year trophy will be awarded to the nominee who, in the eyes of fans, embodies the sexiest, zaniest, most over-the-top non-sexual performer in the gay adult industry. All three nominees will appear on stage during the GAYVN Awards gala, scheduled to take place Sept. 24 in San Francisco’s historic Castro Theatre in conjunction with the annual Folsom Street Fair.
Posted by Paulie at 8:41 PM 0 comments

More news has come in about the PWD raid and closure last week, company's owner Joe Miller committed suicide on August 25th. Miller was a generous man who supported the arts, AIDS research, and children's groups.

One of Millers Friends wrote "Rumors said that Joe was involved with the Marion County Prosecutor and that he copied the formula for his “Quicksilver” “poppers” from chemical tests performed on confiscated amyl nitrate samples. The truth is he got the idea for “Quicksilver” from amyl nitrates, which were popular in the 1960's. In the 60's amyl nitrate was sold over the counter at drug stores. The FDA outlawed over the counter amyl nitrate. Elementary chemistry produced inexpensive Amyl Nitrite which got a user as high as the - by then - prescription “poppers.”

Joe Miller was a vain pursuer of youthful male beauty and a very private, good looking man. He was also very generous with his fortune. Perhaps he could not easily let go of the youthful beauty he enjoyed. We may never know."

Looks like one of the largest manufacture and seller of "Poppers" PWD (Pac West Distributing) has been raided and closed last week.

Poppers are regulated by a variety of federal and local regulations and legal restrictions, though the status of cyclohexyl nitrite, technically not a member of the class of alkyl nitrites encompassed by the law, remains in question in the United States, as a result of the controversial Federal Analog Act.

PWD had a disclaimer for its poppers products "All our nitrite based products are sold as room odorants, liquid incense, liquid aromas, or video head cleaner only. Although research indicates it is generally safe to do so, we do not encourage the misuse of our products as poppers. We are not responsible for the media claims that liquid aromas or poppers are said to be aphrodisiacs or sex drugs, and we do not endorse such claims. Our products do not contain amyl nitrite or butyl nitrite. They contain highly pure isobutyl nitrite, alkyl nitrites, cyclohexyl nitrite or hexyl nitrites only."

This closing is bad news if you are a poppers user, harder to find and a price increase for sure. So if you haven't yet, make sure to stock up.
Posted by Paulie at 5:40 PM 2 comments