Today Falcon announced its acquisition of Massive Studio founded in 2003 by director John Bruno which has 14 titles in its catalog.

“John has developed a strong brand that will perfectly complement our other studios,” Falcon Director of Promotions Troy Prickett states. “Massive will become an important part of Falcon Entertainment’s move to having strong online properties.”

Funny Woman Wanda Sykes on Bailout for the Rich

She gives the best suggestion on investments I have heard!

You know the fucking crazy Bible Thumpers are going to be all over this.

Exec director Huckaby: "PepsiCo has provided PFLAG with an enormous gift, and an unparalleled opportunity, to demonstrate the power we have to create change, no matter where we are, or who we are. Because of the Foundation's generosity and commitment, we now have the resources to produce materials for our chapters to use in their communities, and to create critically important conversations, in every corner of our country."

Next time you want a soda, make sure to think about who supports you.
Posted by Paulie at 7:24 PM 0 comments

You can’t blame this one on the Dog. Lucas Entertainment has debuted Lucas Raunch, a subsidiary line that will focus on fetish sex. The first move will be “Farts” and emphasizes flatulence.

Michael Lucas (not the first time he has been called a Gas Bag) stars in the movie with Nick Capra, Jason Crew and Scott Spears. Newer costars include Cam Casey, Danny Delta, Josef Jakobs, Micah Lawrence, Sean Phillips and Jason Sparks.
Lucas said the idea for “Farts!” came from his fans. “Anything I discover comes from them. There were many with the same request. I didn’t cut the ‘accidents’ out of my films and people were continually complimenting me for keeping the farts in.”
He said models prepped for the flatulence by first cleaning themselves thoroughly. “Air is pumped in with the help of an empty enema bottle,” Lucas said, “and then the model pushed it back out. Basically, clean air goes in and out. All you get is the sound. Anyone making fun of this movie is a fool,” he states. “They may try to ridicule me, but really they’re insulting people who are looking for this fetish.”
“Farts!” is being released as a two-disc set. The second DVD includes a bonus watersports scene between Lucas and Casey, interviews and behind-the-scenes footage.
Posted by Paulie at 10:56 PM 0 comments

Gay and Lesbian Characters Doubled on TV This Year 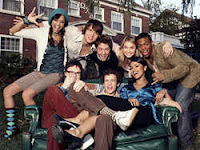 GLADD released it’s annual report on this season of TV Gay and Lesbian characters. Last year it was only 1.1 percent of total characters and this year has leaped to 2.6 percent.

GLAAD president Neil Giuliano said, "This dramatic increase shows how far many networks have come in developing complex, multi-layered lesbian, gay, bisexual and transgender (LGBT) characters. Both cable channels and broadcast networks were looked at in the study.

Of the 616 series regular characters across America's five main broadcast networks, 16 could be classified as LGBT. GLAAD will continue to work with the broadcast and cable networks to encourage more LGBT representations on television, and to make those representations fair, accurate and more diverse.
Posted by Paulie at 10:55 PM 0 comments

Barack Obama responded to McCain's call for a postponement of the debates in a press conference (something McCain has avoided for 40 days now) this afternoon.

Said Obama: "With respect to the debates, it’s my belief that this is exactly the time when the American people need to hear from the person who, in approximately 40 days, will be responsible for dealing with this mess. And I think that it is going to be part of the president’s job to deal with more than one thing at once. I think there’s no reason why we can’t be constructive in helping to solve this problem and also tell the American people what we believe and where we stand and where we want to take the country."
Posted by Paulie at 10:53 PM 0 comments

Buck Angel “Man with a Pussy” gets Sculpted in Marble

Just like “David” Buck Angel know as the best known female to male transsexual adult performer is going to get Sculpted by British Artist Marc Quinn famous for his gold sculpture of Kate Moss. Buck Angle has his own production company which has released several titles including Buckback Mountain and V for Vagina. He also was a big hit in the Titan Film “Cirque Noir” which freaked me out because I knew nothing of him at the time.
"Working with Marc Quinn is one of the most extraordinary experiences of my career. I feel so honored to have someone of Marc's caliber look at me as the subject for a piece of art ", Angel states. "Because I am 'the man with a pussy' and a porn star, this sculpture will push boundaries all over the world," Angel added.
U.K.-based Quinn burst onto the art scene in the late ‘80s in an exhibition called Freeze, for which he created a frozen self-portrait made from a mold of his own head and using nearly 10 pints of his own blood for material. Quinn also gained attention with two sculptures of supermodel Kate Moss, titled “Sphinx;” portrayed in an extreme yoga pose. Moss was modeled in both marble and solid gold, respectively.
The sculpture of Angel will be unveiled in an exhibition that Quinn will mount in London next year, and will eventually travel to New York and several other cities.
According to Angel, the statute will have his trademark cigar hanging from his mouth and will be partially nude, revealing his genitalia.
Posted by Paulie at 11:08 PM 0 comments 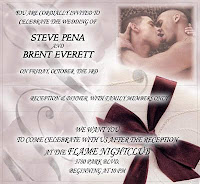 Sting gets a "Little Gay" for Little Britain USA

The hot Police frontman Sting will get hot and heavy gay style in the upcoming Little Britain USA. David Walliams (one of the stars of the series) says "Can I just say that Sting was well up for it? I had to kiss him four times and each time I did it, it got longer and more passionate. He didn't mind one bit!"
Make sure to catch Sting playing tongue hockey this weekend on HBO
Posted by Paulie at 10:54 PM 0 comments

If you ever wondered what kind of Gay Man could support someone who wants to take away all civil rights to gays, ask John McCains Chief of Staff Mark Buse who is himself, Gay. Attached is a video clip of Mark Buse and his “Partner” who I guess don’t want all those silly equal rights like marriage, or adoption, or even to see each other if one gets sick. Thanks “Uncle Mary”.

Clay “Gayken” Finally Comes Out of the Closet

I’m sure you’re shocked as I am, but the star comes out in these weeks People Magazine and opens up about his emotional decision to come out. “I cannot raise a child to lie or to hide things”. You have to wonder if he tells the kid about how he likes to Fist Fuck.
Posted by Paulie at 10:51 PM 0 comments