My Favorite Kind of Weather...

It's nice to know with all the fights for equal rights, now Gay men can look like dumb fucks just like the str8's in reality housewife's shows. Like you don't have your own "Dick Drama" at home now you can see it on TV.

A follow up on the Steven Daigle and Trent Locke fight at a popular WeHo bar last monday night. Daigle recently said, "Sorry, there's a court case pending. I can't talk about anything. But I will say there are two sides, and right now [Trent's] couldn't be further from the truth." His court date is November 4th and if convicted he could face up to a year in jail. But has the entire story been blown out of proportion? Will anyone who actually saw the dust up come forward and tell us what happened?

Locke made a short video thanking his fans for their support.

Rock started his career in the gay adult industry with Jet Set Men, filming his first scene at just 18 years old. As of this announcement he has already been selected for several magazine covers and ad campaigns that will be hitting store shelves and magazine stands in the next few months.

“This kid is going to be huge, you just watch,” Jet Set Men director John Bruno said. “It has been said that with any new change in the adult industry a new bright face must represent that change and the future. Angel Rock is the future.”

“This is who I am, and I love that my mind, body and soul can entertain someone I’ve never met and that turns me on,” Rock said.

“In today’s world it seems anyone can measure up to an exclusive contract, but Angel Rock is the exception, he is a true Jet Set Men exclusive making his debut in front of our cameras and our cameras only,” said Jet Set Men head honcho Chris Steele.
Posted by Paulie at 4:10 PM 0 comments

I love you Phillip Morris Trailer

"Fuck me with a Flaming Fist" I love you Phillip Morris is finally coming out and it looks funny!

What kind of sick fucker beats and kills his own pet, but CircleJerkBoys star Jason Creed has been charged in the murder of his 3 legged dog. The Palm Beach County Sheriff's Office charge Shane Michael Thompson (aka Jason Creed) in the death of his dog "Moonshine", a three legged all white wolf dog mix.

According to a probable cause arrest affidavit, on the morning of Oct. 7, Thompson took the deceased dog to the Cole Animal Clinic on North Federal Highway in Boca Raton to have it cremated. Thompson told clinic staff that the dog had died that morning, possibly due to a seizure, according to the affidavit. But an examination by a veterinarian technician showed signs of blunt force trauma, and further examination by an attending veterinarian indicated that the dog had died from some sort of suffocation, most likely choking, the affidavit stated.

A necropsy showed that the dog suffered severe blunt force trauma prior to death, and that the cause of death is believed to be asphyxiation due to aspiration of food.

Witnesses told investigators that Thompson hit the dog on several occasions. A roommate said that he and Thompson acquired the dog, named Moonshine, in February. In interviews with investigators, Thomson stated that his actions were attempts to teach the dog discipline.

When his roommate arrived home from work on Oct. 7, Moonshine lay dead on the floor. Thompson said the dog tried to bite him, but never explained how he died. A friend of Thompson's called Palm Beach County Animal Control that same day and said he believed Thompson had killed his pet. He said Thompson had called asking for money to pay for the cremation.
Posted by Paulie at 11:31 PM 0 comments 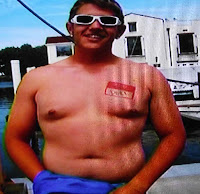 I don’t know how fucked up you have to be to get a tattoo that says “Hi, my name is Dork” I bet this guy can’t keep the chicks away.
Posted by Paulie at 4:54 PM 0 comments

Locke blogged about the fight from his hotel room, saying "deeply embarrassed" about the incident and that he "would never take a swing at [Steven]. And I did not."

Say Goodbye to warm weather with the "Boys off Summer"

I reviewed Lucas' Piss Pigs a couple of weeks ago and gave it 3.5splats, even if your not into watersports this video is fucking hot. Antonio Biaggi's cock is like a huge meat puppet. 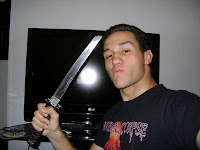 Last year 16 year-old John Katehis brutally stabbed to death gay ABC newsman George Weber after the pair hooked up via a Craiglist hooker ad. Weber allegedly hired the teen to "smother" him in an S/M scene. After his arrest, the killer claimed that he had stabbed Weber over 50 times in self-defense. Katehis' trial began in New York City this week where his lawyers painted the victim as a sexual predator.

From Gay City News: "By inviting the 16-year-old Katehis to his home for a sexual act, Weber “was trying to do something that was 1,000 percent wrong, immoral, and illegal,” said Jeffery T. Schwartz, Katehis’ attorney, in his opening statement. The age of consent in New York is 17. “Although he can be tried as an adult, under no circumstances can he consent to a sexual act,” Schwartz said. “He cannot consent to sex, any type of sexual act, with an adult male.” In the defense telling of this incident, Katehis was an innocent who was plied with alcohol and “what John believed was cocaine,” before being asked to engage in a behavior that made him uncomfortable. After having his feet bound, the older man “pointed” a knife at Katehis and the younger man panicked. The wound that cut Weber’s jugular vein was inflicted as the two men fought over the knife. Katehis received a deep wound to his hand that was bleeding profusely during that fight. “The bottom line is a knife was introduced not by John Katehis, but by George Weber,” Schwartz said."

The now 18yo Katehis will be tried as an adult.
Posted by Paulie at 6:03 PM 0 comments

Check out the laughs from the audience when Christine O'Donnell does not know that our Constitution has a separation of Church and State. She better go home to the cauldron and boil some newt eyes to win this race.

Elvira the mistress of Darkness takes on O'Donnell.

34yo Prince Saud Bin Abdulaziz Bin Nasir al Saud (Now that is a mouthful), admitted to beating his servant in a luxury London hotel in Feb. to death but pleaded not guily to charges of murder.

Throughout the trial several witnesses and tabloids alleged that the two were lovers. The prince denied this claim repeatedly, though the court heard testimony that the prince had ordered gay escorts in London and had frequently looked at websites for gay massage parlors and escort agencies.

Homosexuality is illegal in Saudi Arabia, and, as prosecutor Bobbie Cheema told England's Old Bailey central criminal court during the trial, it “carries the death penalty, which is still applied in some cases.”

During the two-week trial, the court heard that the prince and his servant had been staying at London's Landmark Hotel for nearly a month as part of an “extended holiday” that had also taken them to Italy, Hungary, the Czech Republic, and Morocco.

The prince, who will be sentenced Wednesday, faces a maximum sentence of life in prison.
Posted by Paulie at 5:28 PM 0 comments