The countdown to "The Last Day" has begun at LucasEntertainment.com. The eagerly anticipated porn-actioner is set to premiere for website members on Friday. Home editions will be made available on March 30.

Shot in Ibiza, Spain, "The Last Day" stars Lucas exclusive Jonathan Agassi as a man who stumbles upon an island where its inhabitants are convinced the end of days is upon them.

Things get even stranger when Agassi discovers that a "fame-seeking killer," played by Damien Crosse, is also living on the island and may be playing them all.

"This was the best experience I’ve had filming a movie," Agassi said. "From my first day on the Ibiza set, where I was fucking with hot boyfriends, Will Helm and Kriss Aston, on the edge of a beautiful fort, to battling to stay alive with the powerful Damien Crosse tying me up to drown in the freezing water. I am very proud of the outcome."

Between shoots for the movie Sticking Point in the blazing hot sun in Palm Springs, Trenton Ducati found some time to soak up some local culture.

And no one looks twice but the dog. Damn, Marc Dylan looks Fine!http://www.blogger.com/img/blank.gif

Compliments of RocketTube
Posted by Paulie at 11:58 PM 0 comments

This week the boys celebrate Uranus' Birthday, it seems to be Paulies favorite day of the year, he seems to celebrate it every day of the year! So make sure to probe deep with them this week. They talk about Iraqi Death Squads, Missouri Protection of Gun owners, PA Billboard about Slaves and much more. Paulie reviews Raging Stallion's “Alone on the Range”, 11 rough cowboys solo DVD and gives it 3 splats, the best solo DVD you will ever see. David reviews Climax Gems Hand Job Stroker and thinks seeing yourself get off is hot. Make sure to tell us how you explored your Uranus Day and Stay Hard!

On Friday, Loftis said the education commission reversed [his firing]. Loftis argued he wanted to guide students away from making the same mistakes he made, and that what he did was not illegal.

O'Neal, the star and producer behind "World of Men," a popular gay adult travel series in which he visits exotic, but unglamorous, locations such as Lebanon and Serbia to sample the native flavor, quit the adult industry and his own production company Collin O'Neal Productions in 2010 to begin a career as an educator.

He was suspended in January of 2011 when Nautilus Middle School principal Allyn Bernstein discovered explicit photos of O'Neal on WorldofMen.com. The Florida Department of Education revoked his teaching certification in April, citing a breaching of the moral turpitude clause found in his contract.
Posted by Paulie at 4:50 PM 0 comments

Today is Uranus Day, Make sure to Celebrate Uranus!

It is my favorite day of the year, Uranus Day! It's a day I like to get down to some deep and hard celebrating.

Behind the scenes: Making of Manhunt 2012 calendar

Spanish photographer JP Santamaria was the lucky guy behind the lens who shot some immaculately sculpted men for the Manhunt 2012 calendar.

Adam Chap scene is one of the hottest. He put on quite a show for us with his performance, let me tell you! He knows what we want to see, and boy, does he ever show us! What a tease! First he flexes his bicep. Then he strokes his own muscles in his chest, down to his abs, and then back up to his arms. [Me, me, me!] Then he slides his hands into his pockets! [Stop!] He opens his belt, turns and exposes his furry butt, and we know he is performing a strip tease! [Swooning now!] He runs his hand down one butt cheek, then his fist pushes down his crack ever so slowly. [I could faint!] Next, he spreads his cheeks so that we can see his furry hole, then bends over gracefully, leaning on the post, as if he wants to be fucked. [OH!] He turns to face us and his cock is rock hard. He jerks off and in no time he cums with terrific facial expressions plus sounds, “Oh, ah, ah, ah…”. Four good sized spurts are emitted. WOW! 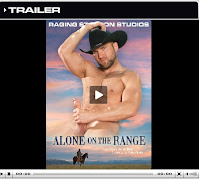 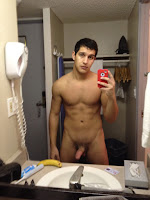 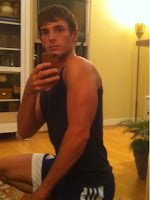 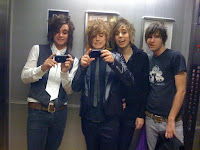 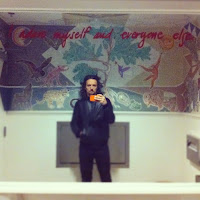 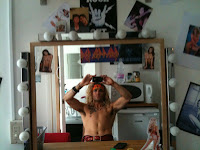 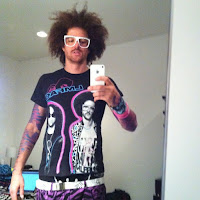 The Men's Room, a 15-minute short film dealing with male sexuality, intimacy, and the concept of public decency is set to have its debut on Sunday at the Atlanta Film Festival. It's directed by Jane Pickett and starring Russell Sams and Blake Robbins.

The Men's Room Trailer from Nature Show on Vimeo.