Newt Gingrich is a Swinger

ABC's Nightline released video of an interview with Marianne Gingrich, the candidate's second wife, in which she claims the former speaker of the House had asked her for an open marriage or a divorce. In an interview with The Washington Post, she said the request came even as he was touring the country talking about family values.
Posted by Paulie at 5:09 PM 0 comments

The Los Angeles City Council has affirmed last week’s preliminary vote to allow AIDS Healthcare Foundation's mandatory condom initiative to bypass the election process and go straight to law. Today's 9-1 vote means that the new ordinance—which ties the granting of film permits to mandatory condom use on sets and imposes a fee on producers to fund unannounced inspections—will go into effect in 90 days unless a court challenge is able to derail those plans.

The passage of this ordinance, though anticipated, will certainly be met with consternation and anger by producers of adult content in Los Angeles, and is sure to result in consequences that neither AHF nor the City Council apparently care to contemplate.

Though they couch the ordinance as a measure to protect workers, both the City Council and AHF have ignored warnings from the industry that mandating condom use while disparaging the testing regime—which has protected performers for years—will not only fail to keep performers safe to the extent imagined by instigators of this measure, but may actually put them in greater danger as companies go underground, leave the state or abide by the new measure in lieu of testing.

The Free Speech Coalition, which has been working vigilantly in opposition to AHF's "relentless campaign against the industry," posted a statement in reaction to the vote on the FSC blog today.

“The Council’s decision is yet another example of government overreach and intrusion. The regulations imposed are without any input from the stakeholders most impacted—adult performers and producers,” said FSC Executive Director Diane Duke said. “Mandatory condom regulation will not increase performer safety, it will diminish the successful standards and protocols already in place and compromise performer health. Government regulation of sexual behavior between consenting adults is, and has always been, a bad idea. The government has no business in our bedrooms—real or fantasy.”
Posted by Paulie at 12:12 AM 0 comments 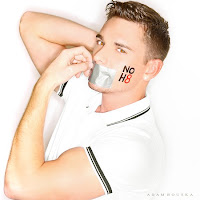 He says on his blog "Guys, I’ve always been pretty resistant to the whole NoH8 photo movement, feeling as though it was one big vanity project.However, the cause does bring great awareness to civil and marriage equality: these two issues have become very hot-headed debate points in today’s society. "

From the vaults of Cobra Video come the unreleased Brent Corrigan tapes. See Brent in all his glory performing in ways never before seen. The star of FUCK ME RAW & TAKE IT LIKE A BAD BOY shows you exactly why he became the twink super idol cover boy.

Candy that you don't know to spit or swallow 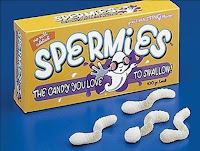 Each Box Contains A 4Oz. Load Of Soft Chewy Candy (About 25 Pcs). Texture Is Similar To Sugar Coated Gummy Bears Or Worms. It Has A Slightly Mango Or Tropical Fruit Flavor. Yummy!
Posted by Paulie at 2:39 PM 0 comments

Ryan Idol aka Marc Donais who was convicted of attempted murder with a toilet lid and 3 other felony charges last September 2010 is in jail but still not sentenced. On January 13, 2011 and instead of being sentenced, Idol requested a new trial, citing ineffective assistance of counsel. On December 9, 2011 Idol was scheduled for sentencing, instead of being sentenced Donais’ attorney asked to be withdrawn from the case, and the court granted the request. Now Idol has ben given a date of May 18, 2012 to appear in Department 40 of the Sacramento County Courthouse. At that time the decision will be made about whether to grant him a new trial. In the meantime, Donais continues to be held (without bail) at the Sacramento County Jail, with every day in custody applied to any sentence he might eventually be given. He doesn’t qualify for a percentage of time off for good behavior, due to the severe nature of his crimes. Donais could face up to 15 or more years in prison for the convictions.


Compliments of RocketTube
Posted by Paulie at 2:36 PM 0 comments

To Celebrate Francois Sagat frist DVD Incubus check him out with Jonathan Agassi in Frankfurt club OK! all Latexed Up! Check out Incubus Trailer - Fantasy and reality converge in the visual feast Incubus, the stunning creative director debut of Francois Sagat.

Men In Love 160 mins Romantic 5 scenes 4.5 splats - Get ready for the kinkiest subject in porn... Romance! Lucas has put together a DVD first of it's kind, "Men in Love" 5 different scenes, each set in a different romantic fantasy setting. And each scene is hotter then the other with 10 of the hottest muscle Gods your eyes have ever seen. You can hear the quivers in Rafael Carreras breath while he fucks the very hot Leo Helios all in a bathtub. You will be shocked to hear in the Question and Answer extra (just as hot as the DVD) on the DVD that most of the stars have never even meet. The Best scene was at sunset on the beach with the perfect piece of manhood, Will Helm and Damien Crosse getting fucked in a perfect scenery and saying "This is so fucking good". One of the great things we learn from behind the scenes extra is that while they are fucking on a mountain top, a wedding ceremony was taking place below, this must be extra good luck for the party. This DVD will blow and mind as well as several loads, go ahead and get a "Heart On" for this fantastic DVD, kudos Michael Lucas.

This week the boys celebrate MLK day and Paulie services as many guys as he can for the occasion (as he does on days with vowels) They talk about Condoms in Porn, Big cocks in the Military in Indonesia, no gay weddings in Cancun and Scientologists are digging in my trash. Paulie reviews the new Lucas Entertainment "Men in Love" and got a "heart on" for 4.5 splats, make sure to watch the DVD extras on this one. David review the cruise missile of butt plugs "Rascal Silicone Rim Raider" guaranteed to hit that perfect beat boy. They answer your questions about getting into the "Service" business and posting photo educate and as always hope you Stay Hard!