Performers and partners Angel Skye and Brad Star have teamed up to launch ASG Entertainment and Slutgarden Productions.

“My favorite scene in ‘South Beach Diaries’ is between Luke Riley and Jason Fury,” Skye states. “Jason plays a lifeguard and Luke a drowning victim. Overall, the film was very well produced and full of boys who were all into each other.”

Sky and Star met three years ago in Florida and became romantically involved. They eventually moved to New Jersey and set about founding ASG Entertainment in earnest.

Skye said “Slutgarden” is borrowed from the Marilyn Manson song of the same name. The company website will include live cams “running at all times,” as well as live chats with company exclusives and other performers. The idea is to provide members with a taste of the day-to-day life of the gay adult performer-producers.

“Brad is a very exciting guy,” Skye said. “Never a dull moment. He is my best friend and I am very lucky to have him in my life.”

Lucas Entertainment Released the second compilation of Chad Hunt’s Collection in a double disc over 300 minutes with never before seen scenes. Here is a collection of Chad Hunt in some of his best work in this 2 disc set. Over 5 hours of 14 guys in 7 scenes of non stop hardcore cock sucking and ass stretching. 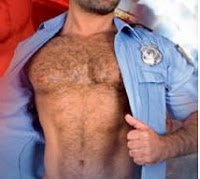 Italy's gay police and military officers are making a big push in the fight against homophobia and prejudices in their line of work.

Some of the gays in uniform have set up a new group, Polis Aperta, to help combat discrimination from their fellow officers, enabling more to come out and not keep their sexual orientation a secret.

The founding meeting for the new organisation will be held later in September in the city of Bologna, and the groups president Nicola Cicchitti said, '"We're coming out against creeping discrimination."

Italy is quite a socially conservative nation where the subject of homosexuality is still quite taboo and gay men are often not comfortable to even come out to their families.

A gay rights group, The Mario Mieli Association, said that the new push by gay police and military officers "will move Italy closer to the rest of Europe and break with the absurd macho taboos which still pervade the armed forces."

Fabio Brandao, accused of taking part in what police call homophobic attack on four people has been ordered not to enter ’s heavily gay South End.

Police allege that the accused man attacked four people 3 men and a woman that were walking along in the heart of the gay area when a car pulled up and yelled anti gay remarks at the group. Brandao and several other men (who remain at large) got out of the car and beat two of the men and punched the woman. The names of the victims are being withheld.

Maybe a better form of punishment would be to make the accused live in the gay neighborhood and get to know the people he attacked. Plus I know some big “Bull Dykes” would love to meet up with him in a dark alley.

Treasure Island Media has extend exclusive contracts through 2010 for Brad McGuire and Christian (one name like Cher or Madonna). Both stars will be at the Folsom Street Fair, Sept 28 in San Francisco to “Meat and Greet” fans at the TIM booth.

Paul Morris founder and owner says “Brad and Christian are mainstays of the TIM cult and culture. I’m truly excited to continue our sleaze-filled relationship.”

McGuire recently appeared in “Fearless” and has earned no small measure of infamy from a headlining role in “Brad McGuire’s 20-Hole Weekend.”

Just when one thought Barack Obama couldn't have this year's US presidential election more in the bag - along comes John McCain's 'interesting' choice for his vice-presidential running mate.

Old John's pick of still-fresh Alaskan little governor Sarah Palin as his second in line has been grabbing headlines for all the wrong reasons.

With Palin's own home-state political scandals, her relative inexperience and the impulsiveness of picking Palin as his mate tarnishing the announcement, now comes the revelation that Palin's 17-year-old daughter Bristol is knocked up to a decidedly studly, self-described 'redneck' 18-year-old ice hockey player, Levi Johnston.

The revelation came as the campaign tried to water-down the Days Of Our Lives meets Jerry Springer-style rumour that Palin faked her own fifth pregnancy with a Down syndrome baby earlier this year to cover for her 17-year-old daughter in fact being the one who was pregnant.

Turns out Bristol wasn't up-the-duff with her Down syndrome brother, but she certainly is preggers now!

The white trash-style circus aside, Palin has had the following views on gay. Asked if she would support the Alaska Supreme Court’s ruling that spousal benefits for state employees should be given to same-sex couples, Palin responded, "No, I believe spousal benefits are reserved for married citizens as defined in our constitution."

Asked if she would support an effort to expand hate-crime laws, Palin responded, "No, as I believe all heinous crime is based on hate."

Palin said she's not out to judge anyone and has good friends who are gay, but that she supported the 1998 constitutional amendment to ban gay marriage. Elected officials can't defy the court when it comes to how rights are applied but she would support a ballot question that would deny benefits to homosexual couples. "I believe that honoring the family structure is that important," Palin said.

Palin said she doesn't know if people choose to be gay. Asked if she would support a Constitutional amendment to overturn the Alaska Supreme Court decision mandating public employers to provide benefits equivalent to same-sex couples, Sarah Palin responded "yes."
Posted by Paulie at 10:45 PM 0 comments

A bitter ex-wife of a newly out gay man has sought revenge on him by posting his coming-out letter on the online auction site Ebay.

In her selling-spiel, the woman writes on the site saying: "You are bidding on the original letter given to me by my former husband when he decided to 'come out of the closet' and face me (his wife at the time), and our kids, to let us know of his sexual preference."

She goes on to write that: "I do not know what it is worth, yet, to us and to a lot of people who would have been through a similar situation, the sentimental value is just priceless. This is a story of love, but not just any story.....it is the greatest of them all....."

Ebay has taken down the auction and the letter can no longer be seen.
Posted by Paulie at 10:44 PM 0 comments

Hot stud Jamie Hendrix who you might remember from videos like award winner “Object of Desire” from Catalina is back and hotter than ever, after a stint behind the cameras in the mainstream world. His new debut film is call Friendly Force produced by Hendrix company G&G media Inc and will be distributed by Pacific Sun. The cast includes Chad Clovis, Brodie Newport, Kevin Cavalli, Dominik Rider and Ryan Thompson.

Southern Decadence, the largest gay festival in the South, had hardly begun when thousands of people Saturday night were told to flee New Orleans as hurricane Gustav continued to barrel down on the Gulf Coast.

Southern Decadence, held over the Labor Day Weekend, regularly attracted more than 100,000 people and had been one of the city’s biggest moneymakers. This year, attendance was lower, as concerns mounted that Gustav was heading toward the Big Easy.

Most people fled New Orleans as Katrina approached, but a small number of people remained in the city, and amid the destruction a small parade behind a tattered rainbow flag made its way up Bourbon Street in an unofficial celebration of Southern Decadence. The group - about two dozen people - all said they lived in the largely gay French Quarter. Defiant, they said they were not about to flee the community despite orders from the city to do so.
Posted by Paulie at 10:14 PM 0 comments

The Actor Kevin Spacey who in the past has denied that he’s gay after the 2004- 4am Park cruising that went wrong when a hustler stole his phone.

Labor Day weekend he was photographed at a “wild party” in Croatia feeling a nice firm ass. Bet the end of the night was even more wild for Spacy.

"We've listened to feedback from our customers who asked that we provide a specific threshold for data usage and this would help them understand the amount of usage that would qualify as excessive," the company said in a statement.

Rascal Video exclusive Benjamin Bradley has announced that he will return to erotica after a two year hiatus as the underwear model with the big package.

Bradley had asked to be released from his previous contract in 2006 to pursue a modeling career. At the time, he had appeared in about ten films, including “Sized Up,” “Starting Young 2,” and “Wrong Side of the Tracks 1.”
He quickly booked a high-profile job representing Ginch Gonch underwear. Bradley made numerous personal appearances at clubs and events around the country wearing the company’s signature candy-colored briefs. He also booked jobs as a physique model.
However, the four-year-old men’s apparel company Ginch Gonch Fashion declared bankruptcy in May. They were subsequently acquired by New Equity Capital, a Montreal-based investment company.
“When I got Ben’s call saying he wanted to return, my face lit up. This is very exciting for me as a director and for all of his fans,” said Channel 1 Releasing partner Chi Chi LaRue. Company director Doug Jeffries described Bradley as “the perfect porn model from head to toe.”
Bradley is the second gay adult performer this summer to return to XXX after taking a spin on the catwalk. Claudio Martin (né Rodrigo de Carli) was also a Rascal Video exclusive when he left erotica to pursue a career as a fashion model. He was a recurring player on the Oxygen reality-television series “The Janice Dickinson Modeling Agency.” However, Martin returned to adult films earlier this summer as an exclusive for Lucas Entertainment.
Posted by Paulie at 3:54 PM 0 comments