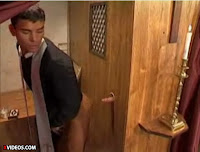 “While we are not going so far as to bless any of the recent releases from major studios such as Vivid, Evil Angel or Wicked Pictures, we have kept ourselves apprised of the use of condoms in motion pictures produced by these and other studios, as well as the plethora of content being produced for internet-only distribution, and have come to the official position that as long as the bird is bare it is in accordance with the Church’s strict prohibition against contraception,” said the spokesperson, who declined to be named.

“In that regard,” he added, hesitating to find the exact wording, “these creations are of a lesser order of venality.”

Hungry for COCK! They Open, Spread and receive. They Just want it hard and loaded!

Absolutely Fabulous is Back for 2012

Absolutely Fabulous is back tonight for the second of their three television specials. This time around things are quite a bit different, with Eddy and Patsy boozing and drugging and everyone generally treating Saffy horribly. Oh, wait…

Shaq is Packing 10" on Jimmy Fallon

Damn Look at Kurt Madison Huge Cock in that swimsuit and Randy Blue's Chip Tanner. I want to deep throat that hotdog.

Scary shit people do in the name of "Jesus". The film centers on the story of David, a straight-A student from Colorado who was sent to Escuela Caribe in May of 2006 after coming out to his parents as gay.

This week the boys are suffering from Superbowl Flu (which is a nice way of saying hangover) and discuss all things important about Football, jockstraps, muscle men, big dicks , including Madonna's Half Time show where she was pulled by hundreds of Viking studs. The half time show has them saying I LUV Madonna. They discuss JC Penney boycotting the Million Moms by hanging up on them and Kidnapping for Christ. They answer your question about checking out penises in the shower and doing a blog. Paulie reviews the Monster Bang Big Dick Revolution and is yelling Viva La Big Dick Revolution- with 3.5 splats and David had a tug of war with his ass and cock over the Slide and Ride Steel Cock Ring and Anal Plug. Make sure to check out the blog and Stay Hard!

New FCKH8 Ad "Get the Fuck Over It