Bad Boy, Cody Castagna was arrested and jailed in Tampa FL this week and charged with grand theft third degree and frudulent use of credit cards.

Why do we love the bad boys so much, Cody can be seen in "Seattle Frat Boyz", "A Seattle Wet Summer" and from the photos above, Treasure Islands Damon Blows America 3 San Diego. 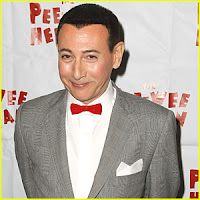 The secret word of the day is "Happy" because I am so happy to hear that The Pee-Wee Herman Show is coming to HBO next year!

The network announced on Tuesday (December 21) that it would film the Broadway production starring Paul Reubens for a special set to air next year. The New York Times notes that back in 1981, HBO aired a Pee-Wee Herman Show special that was the basis for the upcoming special!

FYI: The Pee-Wee Herman Show ends its Broadway run on January 2. So make sure to scream real loud when you hear "Happy" today.
Posted by Paulie at 2:59 PM 0 comments

Duran Duran New Single All You Need it Now

Simon is looking hot with his new beard still yummy after all these years.

Sen Lindsey Graham the Next to be Outed?

Mike Rogers, blogger and gay rights activist, is best known for his activity in outing closeted gay politicians who actively oppose gay rights has Republican Sen Lindsey Graham in his crosshairs. Graham, a Republican, was furious over the last-minute “jam” of legislation that repeals “Don't Ask, Don't Tell,” the 17-year-old law that bans gay and bisexual troops from serving openly.

“I am very disappointed such a major policy change was jammed through the lame duck Congress without the ability to offer one single amendment,” Graham said in a statement after Congress approved repeal over the weekend.

The 55-year-old bachelor has been denying gay rumors for years. Most recently he told the New York Times: “Like maybe I'm having a clandestine affair with Ricky Martin. I know it's really gonna upset a lot of gay men – I'm sure hundreds of 'em are gonna be jumping off the Golden Gate bridge – but I ain't available. I ain't gay. Sorry.”

A pair of tweets on Saturday from Michael Rogers, who claims a perfect outing record, suggests Graham – who continues to serve in the U.S. Air Force Reserves – might soon be deflecting more questions about his sexuality.

“I wonder if Lindsey Graham knows I have pictures of a man who spent the night at his house. pls RT,” Rogers messaged his followers.

About half an hour later, he added: “Just reached lawyer at home. Meeting set for Tues. on releasing pix of man who spent night at Lindsey Graham's.”
Posted by Paulie at 2:29 PM 0 comments

What makes this Japanese PSA for Safer Sex the best Ever you say? Let's start with the Little Drummer Boy music, mix that with sexy, half naked men, Drag Queens and a magical flying condom all Be-dazzled out, put it all together for the best Safe Sex PSA.